Contemporary Returns to Conceptual Art. The show demonstrates how conceptual art offers fertile ground for a sort of "double exposure" artwork, often based on appropriation of other works, with its self-questioning nature and the emphasis on idea rather than form. Artists: Iain Forsyth and Jane Pollard, Jonathan Monk, Yoshua Okon, Joao Onofre, Mario Garcia Torres, Francesco Vezzoli. 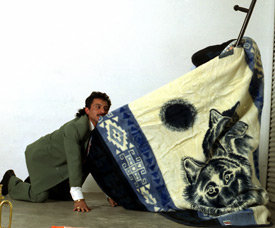 “Once the idea of the piece is established in the artist’s mind and the final form is decided, the process is carried out blindly. There are many side-effects that the artist cannot imagine. These may be used as ideas for new works.” --Sol LeWitt, Sentences on Conceptual Art, 1969

Everything could start with John Baldessari singing lines from Sol LeWitt’s famous conceptual art manifesto in his 1972 video Baldessari Sings LeWitt. Introducing the performance by noting that “these sentences have been hidden too long in exhibition catalogues,” Baldessari made an ironic intersection of two systems, theoretical discourse and popular music, while at the same time giving a sarcastic commentary on the utopian hope for a mass audience for art. Although based on appropriation, the power of Baldessari’s work was experiential as well as referential; behind the initially humorous effect, it communicated to the viewer the discomfort of struggling to bring together two such incompatible languages.

This video can be considered one of the first meta-conceptual exercises, developing the “side-effects,” to use again LeWitt’s words, of someone else’s ideas and turning them into a new artwork. It’s not by chance then that Baldessari Sings LeWitt is one of the favorite “hits” for the artists of neo-con. Three of them have dealt with this seminal piece, though just one of the artworks derived from this confrontation is included here: João Onofre’s Catriona Shaw Sings Baldessari Sings LeWitt Re-edit Like a Virgin Extended Version, is an interpretation of Madonna’s famous song “Like a Virgin” that replaces the original lyrics to the song with excerpts from Sol LeWitt’s tract. Along these same lines, Mario Garcia Torres made a karaoke version of LeWitt’s Sentences that gives everybody the possibility to follow in Baldessari’s steps but using their own favorite tune. Finally Jonathan Monk, in collaboration with the French artist Pierre Bismuth, re-edited Baldessari’s video and added a crudely dubbed Lithuanian voiceover, like in a Soviet era TV newscast, for a show at the CAC in Vilnius in 2001. The original soundtrack was still quite noticeable in the background, making it hardly possible to understand either language.

All three artists, by diverse means, offer a contemporary translation of Baldessari’s seriocomic attempt to put art theory before a wider audience, while not neglecting the contradictions involved in this task. Perfect examples of a neo-con attitude (and I am not talking about neo-conservative politics), these pieces by Monk and Bismuth, Garcia Torres and Onofre combine reconstruction and revision, creating a double-take that parallels two eras, two forms of cultural expression, and two dialogues: the dialogue with the reference work and the dialogue with the present. More than just historical references, they raise contemporary questions that address politics, translation, memory, the accessibility of information, mass culture and commoditization. The appropriation from which they start is very unlike the suggestive surface quoting of post-modernism, but it comprises an alternative view on what has already passed. They are like well done musical covers that take an entire song and reinterpret it while at the same time achieving a new sound, keeping alive the challenging potential of a tune and giving back some emotion from the past. This is a profound form of innovative repetition, a repetition that produces difference.

Today the “dual time” of the cover—a time that belongs to a “before” that continues revealing itself in the “now”—is finding its way into many spheres of creativity, not just music. To take but a few examples in and around the art world, think about Gus Van Sant’s Psycho (1998), or the artistic duo Iain Forsyth and Jane Pollard’s maniacally detailed re-enactment of the legendary last gig of David Bowie as Ziggy Stardust. Music remains a privileged starting point for these operations but, returning to Conceptual art, what about Marina Abramovic re-staging seminal performances from the 1960s and 1970s—not just her own but those of other artists, too—in the Guggenheim rotunda last year? Her rationale for redoing these old pieces, which are often remembered only through mystifying grainy black and white photographs, was to give them life again, but the project ended up being very much about personal interpretation.

While Abramovic’s reconstruction at the Guggenheim of How to Explain Pictures to a Dead Hare was highly respectful of Beuys’ original, Yoshua Okon’s Coyoteria is an openly alternative reading of the most well known Beuysian action I Like America and America Likes Me (1974) which makes a link to corrupt economics and political values. For this performance, Okon replaces the coyote that was locked with Beuys for one week in a New York gallery with a human “coyote”—the Mexican term for a middleman known for trickery and exploitation, who mediates between average citizens and the government or even smuggles people across the border. The failure of Beuys’ project for social transformation is underscored by Okon’s focus on the ferocity of human relationships in contemporary money-driven society.

The works of Iain Forsyth and Jane Pollard and Francesco Vezzoli also refer to older video performance pieces. Walking After Acconci (Redirected Approaches), by Forsyth and Pollard, appropriates Acconci’s confrontational strategies and updates them with a rap music video aesthetic. In a virtuoso 24-minute improvisational performance, the young and talented MC Plan B paces the length of a corridor while smoking and rhythmically talking to the camera about the details of his love life. Three decades after Acconci’s Walk-Over (Indirect Approaches), video clip seems to be the best tool for participatory engagement, for making an intimate expression of the self that is able to get inside other people’s skins and psyches.

Clearly influenced by the artist’s fascination with glamor, Francesco Vezzoli’s The Return of Bruce Nauman’s Bouncing Balls, uses a porn star to re-enact the video that Nauman made in 1969 while bouncing his testicles with one hand. Shot in extreme close-up, Nauman’s work was itself an ironic reference to his earlier film Bouncing Two Balls Between the Floor and Ceiling, for which he bounced rubber balls. Vezzoli brings this action out of the studio and into an amazingly beautiful mountain landscape, showing the muscled, naked body of the actor in slow motion and with a Mozart soundtrack. Nauman’s implications for exploiting the phenomenology of the video medium, with its immediacy, space and intimacy, are here seamlessly mixed with Hollywood cinema and Freudian psychoanalysis.

As shown here, Conceptual art offers fertile ground for this kind of “double exposure” artwork, with its self-questioning nature and the emphasis on idea rather than form. To return to LeWitt’s Sentences on Conceptual Art, “Ideas alone can be works of art; they are in a chain of development that may eventually find some form.” Disrupting this chain of development, artists like Mario Garcia Torres and Jonathan Monk problematize notions authorship and originality by completing works by other artists, intertwining with their elements some personal histories or making “alternate takes” on them. For None of the Buildings on Sunset Strip, a riff on Ed Ruscha’s influential artist’s book Every Building on Sunset Strip, 1966, Monk photographed all of the streets leading to Los Angeles’ infamous boulevard, and therefore none of the buildings. He embraces Ruscha's dispassionate and artless approach to photography, and renews his demystification of the creative process. While the original work cannot avoid the aura given to it by time and art history, Monk's version obliterates it.

Today (Latest News from Kabul), by Mario Garcia Torres, makes reference to Italian artist Alighiero Boetti and his deep love for Afghanistan. It starts from a 1970 Boetti piece for which the artist simply wrote the current date and time on a wall, a typical example of his interest in temporality. Instead of the day’s date, Garcia Torres writes the latest news from Kabul on the wall, using both of his hands simultaneously, starting from the center and proceeding in opposite directions, in the same way that Boetti once did. Each time the work is installed it is composed of a different text that is determined by the current situation in that tormented city. Garcia Torres creates a work that could likely have been done by Boetti because, sadly, the news from Kabul is not very different than it was thirty years ago. If on one hand he manipulates art history by alluding to possibilities that never happened, on the other he seems to point out the insignificance of the impact that man can have on the course of time.

What appears clearly, even within the necessarily concise selection of works exhibited here, is that neo-con is a state of mind and definitely not a codified way of proceeding. There are many different approaches with which to keep alive the challenging potential of Conceptual art while at the same time questioning urgent debates. By creating warps in time, all of these approaches intend to promote confrontation as an alternative to the competitive dialectics of history and culture; and that is why this is the only neo-con that I like.