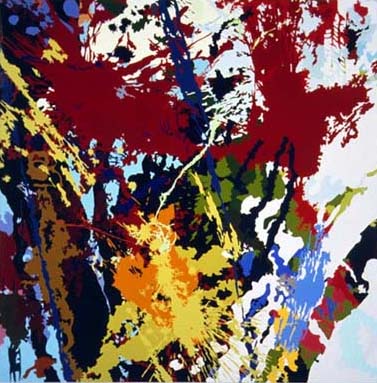 Ingrid Calame documents a parade of pedestrian information left by passers-by. This human material is at the core of her work: tracing stains from the horizontal planes of the street and sidewalk, Calame compresses the daily evidence of mortality with the natural human resistance to the comprehension of our own death.

Calame uses these documentary tracings to create an invented constellation on the floor. The three bodies of work generated analyze this invented liquid event: the silhouette of the whole constellation (enamel paint on trace mylar), a schematic drawing of the overlap of stains (color pencil on trace mylar), and this section imagined as if the stains had mass articulated in full color (enamel paint on aluminum panel). Tracing is the transfer method between all of the bodies of work, keeping a one to one scale relationship to the original stain.

The various forms of Calame's artwork comprise a model of the methodology of cognition. Teasing out links between part and whole, moment and continuum, it is in the ellipses of information between these bodies of work that she negotiates the abstract.

For her first solo show in New York, Calame's exhibition at Deitch Projects will include three aspects of her project: colored pencil drawings, enamel on aluminum paintings, and an excerpt of a large constellation of tracings taken from Los Angeles, constellation made in New York, painted on the wall of the gallery.

Ingrid Calame was born in 1965 in New York (Bronx); she lives and works in Los Angeles.