The exhibition includes some of today's most significant young artists from China.Not only are these the first "post-Mao children", but they are also a mobile generation of artists connected across the globe. 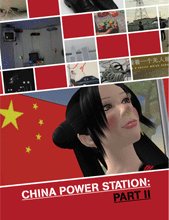 The exhibition 'China Power Station: Part II' includes some of today's most significant young artists from China. Astrup Fearnley Museum of Modern Art in collaboration with Serpentine Gallery in London initiated this evolving project, of which the first part was shown at Battersea Power Station in London last autumn.

In an event-driven culture, sustainability and legacy are at the core of what an art institution should be. For this precise reason, China Power Station was conceived from the outset as an evolutive form, a multivalent project that shifts according to contexts in its host locales. London never had Chinese contemporary art exhibition of critical mass before China Power Staion: Part I premiered in the UK last Autumn. Oslo, on the other hand, has had a comparatively denser history of exhibitions on art and culture in China, so the current version is more the result of fine-tuning. This is evident in the decision to focus on a younger generation of artists to emerge post-2000.

During the 1980s there was an explosion of creativity in China which produced a pioneering generation of artists including Ai Weiwei, Huang Yong Ping and Chen Zhen. These figures came out of an elongated period of cultural isolation and operated in a closed regional context characterised by a highly traditional way of conceiving and appreciating art. They were also the product of a very particular socio-political situation, not unlike that of the USA and Europe during the 1960s. In the wake of the Tiananmen Square riots, a different kind of cultural revolution was brewing and a true awareness of the avant-garde had arrived.

More recently, we witnessed the emergence of a generation of artists born in late 1970s and throughout the 1980s who have come of age in this era of avant-garde identity. In general, they are well educated, versed in the lessons of both Western and Eastern art history and benefit from the freedom to travel, which have enabled them to build extensive international relationships. Not only are these the first 'post-Mao children', but they are also a mobile generation of artists connected across the globe.

Despite their mobility and the tendency of their predecessors to go into exile overseas, this younger group chose to stay in China. One reason for this may be because of the sometimes advantageous working conditions and beneficial economic situations that can arise and which are helpful in the production of their work. Additionally, China is a sign of a power, resilience and dynamism in the new millennium: it has shifted globally from the cultural periphery to the centre, and the artists wants to stay in the country of their birth because they are intrigued by their homeland and are eager to be a part of its future development.

Though Western artists still have innumerable issues with which to engage, and to even contest, these concerns are arguably heightened in China. In other words, Chinese artists are implicated in a habitual struggle not only to produce work but to negotiate the challenging reality of the social, economic and political landscape in which they live. One goal of China Power Station: Part II, therefore, is to shed light on these struggles and to uncover some of the most innovative responses that are currently being generated in relation to this territory that provides such a rich terrain for artistic exploration.

As an exhibition, China Power Station must also be seen against the backdrop of the extraordinary development of museums and galleries in China in recent years. Indeed, collections are presently being built at speed, and culture is being written as it takes place. Yet China Power Station: Part II is not merely a knee-jerk reaction to this state of affairs, but rather a considered response. Above all, it is the curators intentions that China Power Station serves to complement the programmes of these burgeoning institutions in China, and to open more dynamic ways of thinking about this new generation of Chinese artwork, exhibited by the Serpentine Gallery, London -- autumn 2006 (Part I), at the Astrup Fearnley Museum, Oslo -- 8.9-2.12.07 (Part II), at MUDAM: Musée d'Art Moderne Grand-Duc Jean, Luxembourg -- spring 2008 (Part III), and finally brought back to China and shown in Beijing -- autumn 2008 (Part IV).

China Power Station, Part I and II is initiated by Astrup Fearnley Museum of Modern Art and Serpentine Gallery and supported by The Red Mansion Foundation.