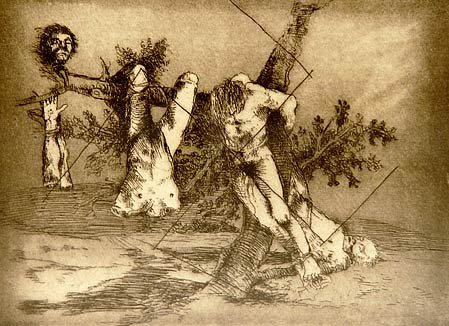 Using clever digital tricks, Ryuta Amae creates what he describes as “virtual memories”. His sources of inspiration are myriad: vast imaginary landscapes which he draws in black lead, and banal images drawn from everyday life, which he modifies in extraordinary ways. The first work in a new series, maternity, which he is presenting here, is based on a real photo which he interprets in order to produce a scene with religious connotations. As always with Amae, there is a gap between the identifiable subject (here, an archetypal Virgin and Child) and the elements disturbing the interpretation of it (nudity and a dark setting). Apart from his technical prowess, his photographs, which resemble daydreams, question sharply the relationship between the recorded image and the memory: is digital manipulation akin to altering memories?

The huge panoramic views by Nicholas Kahn & Richard Selesnick bring the viewer straight into the world of the imagination: each photograph can be looked at individually or in relation to the other images making up the series. An essential role is played in these photographic tales by the written word, the narrative. The sources are very varied: from the exoticism of City of Salt to a homage to the science-fiction prose of the beginning of the 20th century with Apollo Prophecies. Mixing genres is also a great speciality of Cédric Tanguy: his photographic fresco in which he appears as the grand admiral of a frenzied polar expedition is (actually) inspired very freely by the painting Vue de l'océan glacial, pêche au morse par des Grœnlandais by Frenchman François-Auguste Biard (1798-1882), produced following his visits to Lapland and the Spitzberg. There is no need to point out that the painter’s concern for accuracy is quite alien to Cédric Tanguy, who prefers to allow his fertile imagination to roam free…

However, mystery can emanate from something other than baroque, while dreams often distort reality only slightly: the images by Inez van Lamsweerde go even further because they introduce into an already fictional universe – fashion – visual discrepancies that are both simple and spectacular. In the same way, Sam Taylor Wood uses Bram Stoker’s Chairs to engage in several levels of interpretation: his allusion to the author of Dracula is a reminder of one characteristic of vampires – they do not have shadows, just like the chair on which the artist is perched. The improbable position of the body is emphasised by that of the phantom chair. Jean-François Fourtou has no need of a complex strategy: the presence of one of his very realistic camels alongside Mr and Mrs Messmer confers a touch of welcome humour to the bourgeois drawing-room.

As for Hendrik Kerstens, the bizarre is at the heart of his project which he has been conducting for over ten years, using his daughter, Paula, as his sole model. Possessed by the spirit of the Dutch 17th century painters, her portraits bear the marks of a doubly ambiguous relationship: she is the only subject of her own father. Ambiguity is also at the heart of the work of Shadi Ghadirian, which focuses on the female condition in contemporary Iranian society. Without once falling into the cliché of denunciation, the photographer plays subtly with the taboos on representing the body. Ctrl, Alt, Delete, her new series, evokes like the previous ones the gap between tradition and modernity. Concealed by the black background, the female character is simultaneously revealed by the computer software icons she holds. As for Carlos Aires, the hilarious faces in his gallery of portraits contrast with the severity of the black baroque frames in which they have been placed. But it is all in plastic – just for a laugh, so to speak.

In the church images of Andres Serrano, the minute execution of the photography is inversely proportional to the apparent banality of the subject – architectural details which thereby acquire a strange aura. However, in Paul Glazier’s work, everything is stage-managed to create a universe hovering between the celestial and the terrestrial, peopled with humanoid ectoplasm. In his video Yellow Brick Road Works, revisiting the central theme of the Wizard of Oz, sound occupies a key place and emerges as an extension of the strange world of the photographs.

While the neon blue and white of Tracey Emin evokes a cry of love and a fusion relationship (You Forgot To Kiss My Soul), the sequin embroidery of Frances Goodman, precious objects used as supports for various maxims, are geared more to introspection. I Am The Happiest Person Alive, Deadly Serious…: drawn from conversations with des body-builders, etc. these phrases refer to collective emotions, but emotions which each person feels in a profoundly individual way. The artist compares her work to the pop music of a radio station: whatever her mood, she always ends up hearing a song she likes…

The sculptures of John Isaacs and those of Olivier Blanckart are deeply anchored in the real world, where they introduce all kinds of distortions: with Let the Golden Age begin, the former transforms a memorable drinking session into a fairy-like vision, while his portable tombstone (A Perfect Soul) plays at defying the laws of physics. With his giant portrait of Catherine Millet as an Asian goddess, her body covered with vulvae, Blanckart points out that reality is rarely unequivocal – and that the founder of Art Press could very well become reincarnated as the heretical author of an autobiographical account of her sexual life. Things are much less complicated for Cheri Samba since, in any case, all chicks are the same (Toutes les nanas sont pareilles), a conclusion she reached at the age of forty. David Nicholson, on the contrary, ensures the extreme individualism of his models: his tiny paintings each bear the name of the woman in the portrait (Christine, Gabriela, …), and are charged with an erotic tension that is at times suggested, and at times displayed. A human skull, vanitas, completes the set in a very natural way…

While the media submerge us daily with bloody images that make up a considerable proportion of the international news, the Disasters of War engravings by Goya dating from the start of the 19th century have lost nothing of their persuasive force in denouncing the atrocities of the Napoleonic occupation. Or have they? When they acquired a full set of these eighty plates, the intention of Jake & Dinos Chapman was to “correct” them, “like in The Shining when the butler encourages Jack Nicholson to kill his family to correct the situation”, explains Jake… Victims and murderers are thus endowed with coloured clown’s heads and puppies to produce a new, tragic-comic and updated interpretation of the Disasters engraved by Goya. In a more humorous tone, Annie Sprinkle “corrects” the feminine body of art in her own way in the series 15 Sluts and Goddesses Inside Linda Montano, using a number of accoutrements.

The exhibition also pays homage to the very great talent of a young artist who died recently in a tragic way, the video-producer Jeremy Blake (1971-2007). 'Sodium Fox' (2005), produced in collaboration with poet and musician David Berman cultivates the sense of mystery inherent to all of Blakes’ productions. Based originally on the painting by Eugène Delacroix, “Freedom guiding the People”, the film presents a young striptease dancer from Los Angeles: in the eyes of the artists, she embodies the same allegorical values of confidence and liberty as those which Delacroix accords to his model. The visual complexity and variety of the décor permit many levels of interpretation.

When the English word “rare” does not mean “bloody”, it often means “strange”: the epitome of a “faux ami” which cannot therefore be relied on too much – just like art, which teaches us to beware of this strange thing called reality.