The title of the exhibition is provocative and possibly shocking; above all, it is intended to be socially explosive as well as artistically sensitive and intuitive - and also to describe pictorial worlds which can be expected to be loaded with highly expressive symbolic contents. Works by: Zoya Cherkassky, Julia Fullerton-Batten, Atta Kim, Robert Gligorov, Yun-Sun Jung, Nicholas & Sheila Pye, Daniel & Geo Fuchs, James Higginson and Alona Harpaz. 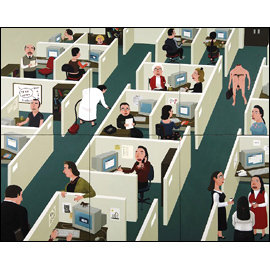 The title of the exhibition is provocative and possibly shocking; above all, however, it is intended to be socially explosive as well as artistically sensitive and intuitive – and also to describe pictorial worlds which can be expected to be loaded with highly expressive symbolic contents.
The particular intention of the gallerist Dr. Caprice Horn, who has participated in numerous international photo- and video-juries, is to present a richly faceted spectrum of her most recent program, and thereby to represent an existential aspect of global society, one which illuminates not only psychological nuances but also the profundities of human existence.

The photo artist ATTA KIM, born in Korea in 1956, is represented with his most recent series which, in both sensitive portraits and intensively staged obsessions, on the one hand takes up sacred themes and, on the other, adds profane aspects which condense into a spectacular layering of ephemerality, orientalism and apocalypse. Intense chromatic spectrums and distanced, Asian-inspired gestures recall vividly dramatic theatrical worlds whose opulent density, however, also imitates and elucidates film sequences.
After numerous single and group shows in Sydney, Moscow, Paris, New York and Japan, as well as a presence at the São Paulo Biennial and participation in an exhibition at Berlin’s House of World Cultures, his current work may now be seen once again in Berlin.

In their video trilogy, the artistic duo SHEILA & NICHOLAS PYE have taken up the expressive dynamism of the gender theme. Extending far past the tradition of such predecessors as Anne & Louise Wilson or Tony Oursler who in the meantime have become “classic,” these works depict the abysses of mental cruelty and, in oppressive film narrations concerning the strategy of the human will to survive, culminate in a dramatic competition between the sexes – as simultaneous allies and enemies.

The photographic works of JULIA FULLERTON-BATTEN underscore the aspect of teenagers’ reality from a quite special point of view. The competitive situation of the “beautiful and successful” – with the star-cult of Paris Hilton and other glamour girls – which is supercharged in the visual media with model contests and in the print media with the Manga aesthetic, and which becomes socially instigated and exacerbated by glossy magazines, is staged by this artist as a subtle, superficially innocuous ritual of everyday life. Almost incidentally, the camera records as a “hidden observer” the sharp and often painful interface between girlishness and growth towards adulthood. The artist thereby challenges the viewer to a “quiet attentiveness” and a scrutiny ranging from patience to sensitivity and bordering on psychological dissection.
The artist has won numerous international photography awards, including the Prize of the Royal Photographic Society London in 2005, the Prize of American Photography in 2004 – 2006, and the Photo Review Prize in 2004.

In her paintings, ZOYA CHERKASSKY from Kiev institutionalizes the levels and angles of our observations with regard to the “blank spaces” of our social existence. Her deserted views of waiting rooms, public banks or exhibition halls imply the areas of influence between social and hierarchically organized public presence, with its yearning for recognition and prestige, and the necessary withdrawal into the private, almost familial sphere. The works demand an orientation and definition of professional prestige on the one hand, and difficult spatial arrangement on the other. Their painterly, spatial stagings bear witness to the activity of a critically aware but also discretely withdrawn observer. The artist functions as the director of her pictorial worlds but also participates as a production assistant who reserves the props for herself, and for this reason the social aspects can give rise to multiple readings and interpretations. Having emigrated to Israel in 1991, the artist drifts adroitly between worlds in upheaval in the former East Block, and the both politically and religiously charged situation in Israel.

The South Korean artist YUN-SUN JUNG is herself the model for her highly expressive photo montages and, in surreal costumes, she plays her feminine roles from coquettish to bourgeois, erotically charged to cynically affected, arrogant to magnanimous. The techniques of montage and collage are so artificial in her work that her pictures establish a complex referentiality, both to the global advertising and glamour worlds and to portraits of sovereigns and famous figures such as Catherine de’ Medici or the Duchess of Alba (painted by Goya), as well as the pale and delicate, Asiatic beauties of the Shiseido make-up campaigns. Her references to femininity wander timelessly between centuries, epochs and genres, and ultimately they develop an individual and unmistakable pictorial language and handwriting. The artist, who has several times participated successfully in the Bansun Biennial in South Korea, has already exhibited in Tokyo and Seoul and will now be presented for the first time in Europe.

JAMES HIGGINSON, an American photo- and multimedia-artist coming from Los Angeles, worked for decades in the film and advertising industry. There he sharpened and perfected his view of the superficial aesthetic of the advertising world on the one hand, and the lavish stagings of Hollywood on the other. He subtly disrupts the world of beautiful homes and its yearning for harmony, success and boundless trust, transforming it into a cynical staging of everyday domestic violence, hate and hysteria. The themes of his series are alcoholic fathers who beat their wives in the presence of their children, teenagers who torture and maliciously mock their parents, as well as subjects which are taboo in America, such as drug addiction, depression and excess. The photos are perfectly styled from the era of the 1930’s to the 1960’s – that era of the Cold War, Cuban missile crisis, Kennedy assassination, civil rights movement and extreme social tensions, along with great economic successes on the one hand and foreign-policy failures on the other, when the American dream of life was so deeply shaken to its very foundations – Higginson’s works expose and dissect, in a sensitive psychological manner, the American soul and psyche.

In his photographs, the Macedonian ROBERT GLIGOROV opens corporeal worlds which depict human beings as transfigured beasts. His animal camouflages, consisting of skins from plucked poultry or from snakes which are applied to human bodies in an irritatingly authentic manner, demonstrate shockingly how closely the borders of plastic surgery are linked to existential psychological conditions. His hybrids and fabulous chimaeras are skinned and dissected in a mystic-animalistic, diabolical and evil, even cruel manner, with despairing grimaces and tortured mimicry. But Gligorov is interested, not only in the torments of human existence, but also in the point of view adopted by seemingly enlightened human individuals towards animal beings which, in his most recent works, he builds into mutated, intermediate beings outfitted with threatening weapons. The artist, who lives and works in Milan, has participated in numerous international group shows and is exclusively represented by Caprice Horn in Germany.

The artistic duo DANIEL and GEO FUCHS poaches charmingly in the worlds of American comics. Heroes such as Batman and Spiderman, along with artist idols such as Andy Warhol or Jeff Koons – the pop icons of American society – are staged in disguise and masquerade, in an even more artificial manner than they were ever presented in real life. Instead of a wig, Andy Warhol wears a plastic hood and conveys the appearance, not of a figure from a wax museum, but in fact of a display-window mannequin transformed into a mass product. The play with miniatures and models, small figures resembling Barbie dolls, imbues the portraits staged by the Fuchs duo with a cynical aftertaste of Disneyworld, only that the roles are more subtly and ironically outfitted and put “into the picture.” The two artists, who have already been represented in several solo- and group-exhibitions in the Galerie Caprice Horn, are presented here with their video “Movements” from the year 2000, a “snippet work” which dismembers sequences from pornographic films of the nineteen-seventies and -eighties, repeats them in scurrilous loops, and transforms the customary “meat market” into an absurd anatomical montage. Daniel and Geo Fuchs are currently presenting their “Toys” series in the Ursula Blickle Stiftung and, starting in January 2008, in the Museum Wolfsburg.