Kandors. The exhibition features sculptures, lenticular lightboxes, and videos related to the fictional city of Kandor, the capital of Superman's home planet Krypton. In this show Kelley reconstructs ten unique versions of Kandor, with its enclosing bottle, which, despite obvious differences, purport to depict the same city. Thus, Kandor is an apt symbol of the artist's interests in the vagaries of memory. 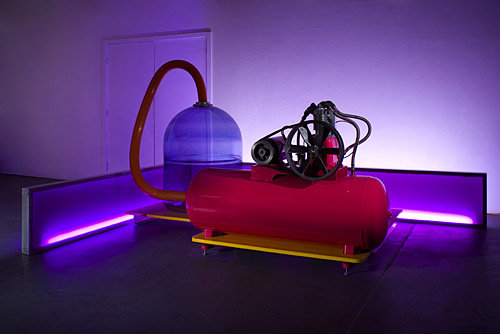 The exhibition of new works by Mike Kelley at the Jablonka Galerie features sculptures, lenticular lightboxes, and videos related to the fictional city of Kandor, the capitol of Superman’s home planet Krypton. According to the Superman mythos, Kandor is the only remaining vestige of the exploded Krypton, and the city is preserved, in a reduced state, in a bottle in Superman’s possession. Interestingly, the image of Kandor was never codified and the numerous representations of it in the comic book throughout the years vary widely in appearance. In this exhibition Kelley reconstructs ten unique versions of Kandor, with its enclosing bottle, which, despite obvious differences, purport to depict the same city. Thus, Kandor – as an eternally maintained, but constantly reconfigured, relic of Superman’s childhood – is an apt symbol of Kelley’s interests in the vagaries of memory, and relates to his own works that refer to Repressed Memory Syndrome, such as Educational Complex (1995), an architectural model made up of replicas of every educational institution that the artist ever attended, with the sections he cannot remember left blank.

Such issues were foregrounded in an earlier work by Kelley that also focused on the theme of Kandor: Kandor-Con 2000, which was presented at the exhibition Zeitwenden at the Kunstmuseum Bonn in 2000. In the current exhibition, Kandors, Kelley shifts attention away from such themes to focus on the formal diversity of the various versions of Kandor. Ten images of the bottled city were selected from the hundreds of examples found in Superman comic books, and these have been recreated as sculptures scaled up to human dimensions. The original found images of Kandor were graphically altered to accentuate color and form then rendered as lenticular lightboxes, which gives the images the illusion of dimension and movement. The actual recreations of the Kandors’ enclosing glass bottles, some over forty inches in height (making them, probably, the largest glass vessels ever produced in this manner) were hand blown at the Kavalier Glass factory in Sazava in the Czech Republic.

The Kandors project is an exercise in the translation of graphic two-dimensional images into three dimensional sculptures. The flat areas of background color in the comic book panels have been rendered as illuminated Plexiglas walls. The various versions of Kandor are represented by under-lit resin sculptures in a variety of colors. The various bases and plinths that the Kandors sit upon have been constructed as actual furniture. But, in many cases, the bottles, bases, and cities have been separated and spaced apart, complicating their formal relationships. Kelley has described this process as an attempt to make an artwork as flat, colorful, and visually simple as a painting by Matisse which operates in three dimensions, yet still maintains an overall sense of graphic flatness. All of the works feature light or motion, and the exhibition is self-illuminated.

In addition to the lenticular lightboxes and sculptures there are three types of videos included in the exhibition. Large-scale videos, projected directly on the gallery walls, focus on the glass bottles, the interiors of which have been activated with swirling patterns of light or atmospheric effects. The second group features time-lapse videos of crystals growing in common household glassware such as simple jars and bowls, accompanied by soundtracks of “new age” music composed by the artist, and presented on small monitors so that they are close to actual scale and imbued with a sense of intimacy. The third group of videos consists of a selection of graphic depictions of Kandor that have been animated in the manner of popular cartoons. Each bottle emotes, performing a single emotional sound or bodily movement: screaming, breathing, cooing, giggling. These are presented on flat screen monitors that hang directly on the wall like paintings.