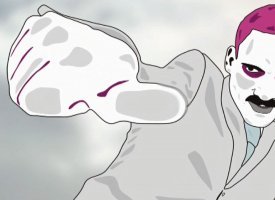 The artists in Animated Painting, while taking advantage of animation concepts and technologies, are persistent in their use of pictorial codes associated with historically grounded painting and drawing traditions. Their animations rely on the visual and narrative opportunities that emerge through the melding of images associated with gestural handwork (drawing, painting, printmaking) and the durational qualities of cinema (celluloid or digital), where the unfolding of the animated image hovers momentarily before advancing forward, favoring the illusion of motion.

There are two basic methodological strands taken by artists in Animated Painting: image construction based in drawing, and painterly representations that are direct manipulations achieved by drawing or painting on top of live-action film or video footage. A third approach is presented by Jeremy Blake, whose eclectic collages “remix” photo-based sources with overlays of complex, digitally-generated shapes of different colors. A host of visual and textual preexisting source material forms the foundation for many of the animations, and these sources converge with the spontaneous, prerational, fluid, and even childlike qualities associated with the art of animation. At the same time, the work draws upon animation’s commercial, experimental, and avant-garde applications in both historical (analog) and contemporary (digital) versions.

Animated Painting is accompanied by a scholarly catalogue featuring essays by Betti-Sue Hertz, animation studies scholar Suzanne Buchan, and media theorist Lev Manovich, an exhibition checklist, artist biographies, and a DVD with sample clips of the works in the exhibition.

In conjunction with Animated Painting, SDMA is presenting a free four-part symposium titled Animation: From the Avant-Garde to Popular Culture. The symposium takes place on Thursday, November 1, and Saturday, November 3, and includes panel discussions by leading art and animation scholars, presentations of artworks, and a screening of animation by Southern California artists.

After its run at SDMA, the exhibition will be on view at the Centro Cultural Tijuana (CECUT) in Tijuana, Mexico, from October 1 through December 31, 2008, and at the Faulconer Gallery at Grinnell College in Grinnell, Iowa, from February 6 through April 19, 2009.

Additional support is provided by the City of San Diego Commission for Arts and Culture, the County of San Diego’s Community Enhancement Program, and members of the San Diego Museum of Art.

The historic San Diego Museum of Art provides a rich and diverse cultural experience for more than 400,000
annual visitors. Located in the heart of beautiful Balboa Park, the Museum’s nationally renowned collections
include Spanish and Italian old masters, a vast Asian collection, 19th- and 20th-century American paintings and
sculptures, and an international selection of contemporary art in all media. In addition, the Museum regularly
featuresmajor exhibitions of art from around the world with exhibition texts in English and Spanish, as well as an
extensive year-round schedule of supporting cultural and educational programs.