An Exhibition of Video Works 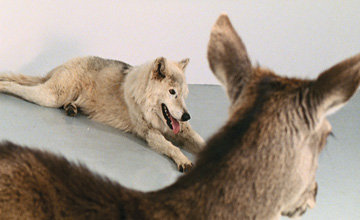 An Exhibition of Video Works

The exhibition was curated by Andrea Inselmann, curator of modern and contemporary art at the Johnson Museum.

The Herbert F. Johnson Museum of Art at Cornell University presents Stop. Look. Listen., an exhibition of video works in all temporary exhibition galleries, in the lobby, and projected on the building’s façade. The exhibition marks five years of collecting in the area of video and continues the Museum’s commitment to video as a vital part of its program.

Stop. Look. Listen. seeks to consider the continuities between the two prevalent idioms -feedback and immersion- in video works of the last fifteen years. It focuses on pieces that have a significant relationship between sound and image, such as Salla Tykkä's and Jesper Just's works that make use of existing soundtracks, or Mircea Cantor's Deeparture, that is purposefully silent. Within this treatment of sound and image, artists also address issues related to spectatorship and the represented and viewing body, such as the floating bodies in Janet Biggs's Water Training, or the stumbling body in Patty Chang's Losing Ground, or Janine Antoni's balancing act in Touch.

Using 25 works by 16 international artists, the exhibition illustrates that a multisensory response to the moving image can occur within both practices, feedback and immersion, as long as certain conditions within the image and the installations are fulfilled. Many of the featured works seek to destabilize traditional oppositions between viewer and viewed by emphasizing a more inclusive vision, in which the viewing body becomes a creative agent, thus proposing an emancipated viewer.


This project was realized in part with financial support from the Mondriaan Foundation, Amsterdam. The exhibition has been funded in part by public funds from the New York State Council on the Arts, a state agency. Additional support was provided by the Fifth Floor Foundation, the Consulate General of the Netherlands in New York, Hermès, and the Cornell Council for the Arts.