Martin Oppel's sculptures seem to give weight to the theory that Martians helped construct our ancient past. His works may appear to remark on the difference between the primal and the modern but what becomes clear is that there is little distance between the two and the result is wonderfully weird. The gallery presents also a Bernard Frize's solo show. 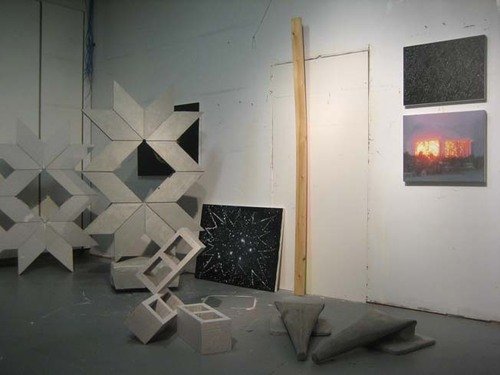 Martin Oppel From a very early age I’ve been an avid admirer of books with titles like “Unexplained Wonders” or “Our Mysterious Planet”. As a child I would spend hours flipping through pages filled with mummies, fallen meteors, tales of spontaneous human combustion, Bigfoot, fish raining from the sky, Aztec rituals, and mosaics composed of human bones. These books were an endless collection of curiosities designed to inspire the feeling that there is still so much I don’t know. With these books in hand I became a world traveler: I knew the secrets of the Amazon and stood on a blood soaked temple just after a human sacrifice; I was there when they opened King Tut’s tomb and caught the curse right along with them. Aside from traveling the world (and time itself) these books introduced me to a vocabulary of imagery seemingly specific to the genre. Whether thru mute toned photographs or painted recreations these images all share a feeling unmistakably recognizable as textbook versions of the weird. I call it the “aesthetic of wonder” and to me Martin Oppel creates work that falls directly in this category.

With a mix of sources varying from worship rituals to the cosmos, Oppel fashions works that illuminate and encourage curiosity. In a recent body of work Oppel has focused on the glare of the stage, the faint silhouettes of a crowd in rapture, blinded by the glow of spotlights. Looking at these “raptures” I’m reminded of both religious fever and a devoted fan, really the same thing… perhaps the crowd at the Roman Coliseum or a Christian rock concert? While Oppel’s paintings have a timeless feel, his sculptures tend to mimic the look of relics. Oppel’s sculptures seem to give weight to the theory that Martians helped construct our ancient past. Modern materials mix freely with ancient sensibilities, the result gives the appearance of being both dated and updated at the same time. Oppels sculptures are like the photo of an ancient cave drawing that resembles a spacecraft I saw in one of those books.

Oppel plays with notions of modernity and casts them (literally) in ancient ways. His soil cinderblocks are not simply a characterization of nature vs. progress. Instead, they function almost as a pun due in part that the very “nature” in question is suspect. When does “natural history” end and all else begin? Perhaps it is only when an object is placed in a museum dedicated to it that an object enters the realm of natural. If that is the case, Oppel’s work seeks to upend the qualifications; a limp traffic cone is petrified in stone, an ancient statue doubles as a piñata and modern signage transforms into objects worthy of an ancient bonfire. Martin Oppel’s works may appear to remark on the difference between the primal and the modern but what becomes clear is that there is little distance between the two and the result is wonderfully weird. Oppel's upcoming exhibition at Galerie Emmanuel Perrotin promises to expand these themes and more. The continued use of the familiar Miami/construction landscape vocabulary now includes the illusory physics of light and matter. Within a dialectical strategy, objects in impossible stances blur the lines between magic and engineering, and light itself, is pragmatically broken down into its scientific basics as well as presented for its capacity to mesmerize.
top.