Political Art in Russia. The exhibition retraces the development of a movement which, from the early 1970s and in the wake of Socialist Realism, would stand out as the first original art movement in Russia since the 1920s avant-garde. Sots Art is chronologically staged in all the foundation's rooms, from the origins of the movement to its influence on contemporary works. Curated by Andrei Erofeev. 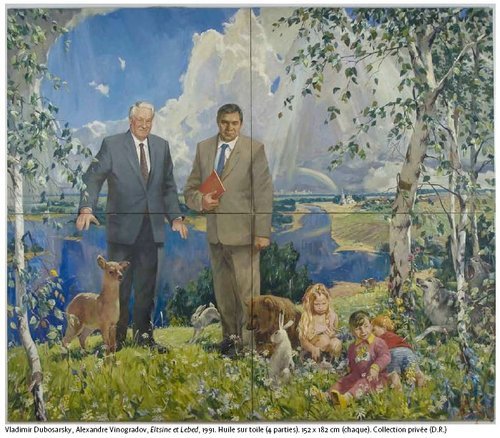 Beginning in October, la maison rouge presents Sots Art: Political Art in Russia. The exhibition will retrace the development of a movement which, from the early 1970s and in the wake of Socialist Realism, would stand out as the first original art movement in Russia since the 1920s avant-garde. Sots Art will be chronologically staged in all the foundation's rooms, from the origins of the movement to its influence on contemporary works. The term was coined in 1972 by two Moscow artists, Vitaly Komar and Alexander Melamid, as a take on Pop Art, "Sots" being a contraction of Socialism and Art.

Rather than the rejection and denunciation that motivated the first generation of Nonconformist artists, Sots Art follows a third way. It appropriates and subverts propaganda images and slogans to transform them into something that is both playful and grotesque. Through its irreverent use of symbols which, in their original context, were intended as a means of dominating the individual, Sots Art had a genuinely liberating effect on Soviet minds.

Historically, Sots Art refers to an exhibition of a dozen works of Soviet Pop Art, staged in a Moscow apartment in 1972. The term was then taken up by a group of artists which developed in the 1970s and 1980s around personalities such as Vagrich Bakhchanyan, Ilya Kabakov, Alexander Kosalopov, Leonid Sokov, Dimitri Prigov, Boris Orlov and the Nest Group. Sidelined from official exhibitions, they showed their work in their own homes which became venues for creation, exhibition and exchange for the Moscow avant-garde. This period is symbolised by the replica apartment at the entrance to the exhibition. Sots Art dominated plastic arts, architecture, design and film throughout the Perestroika years (1985-1991).

The wave of Jewish emigration in the second half of the 1970s took Sots Art beyond the USSR. Many artists moved to New York where they staged exhibitions and began to combine American and Soviet symbols. Sots Art was also taken up by artists in the crumbling Eastern Bloc, and by Chinese artists from the 1990s. Sots Art has proved to be a prolific trend not just within the Communist system but in societies which exert other forms of pressure, via the media and religion in particular. Russian art in the 2000s is a case in point, where comparable attitudes have emerged in the work of Oleg Kulik, the Blue Noses Group and the PG Group.

A vast panorama of the movement, Sots Art: Political Art in Russia was shown at Tretyakov Gallery as part of the Second Moscow Biennale of Contemporary Art in 2007. The exhibition at la maison rouge in Paris includes additional works from American and European collections. The majority of the works shown belong to Tretyakov Gallery or to major Russian private collections (Antonichuk, Semenikhin and Smuzikov).