Colocation [Living Together ] #1 in association with Ilya Budraitskis. The starting point for the Living Together programme was a series of invitations by Elena Yaichnikova and Nicolas Audureau to artists to create projects specifically for La box. 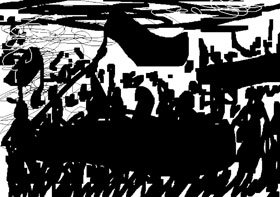 Colocation [Living Together ] #1
in association with Ilya Budraitskis

David Ter-Oganyan was born in Rostov-on-Don, Russia, in 1981 and lives and works in Moscow. His contribution to the la box show is Manifestations with Ilya Budraitskis is a series of digital images printed on canvas, initially intended as an incitement to civil disobedience. A working group to be set up with fourth and fifth year students will function as a kind of advisory committee in the leadup to a demonstration in Bourges on Thursday 25 October. The aim here will be to test the limits of effective action in art and the utopia/ commitment paradox.

David Ter-Oganyan studied at the School of Contemporary Art – founded by his father Avdey Ter-Oganyan – where the overwhelming majority of the new generation of Moscow artists trained. These same young artists would later create the well-known Radek Community. In the late 1990s David Ter-Oganyan and other leftwing community members attended the seminars given by Anatoly Osmolovsky and took part in his "Against All!" campaign, calling themselves the Non-State Control Committee. Subsequent actions included "Barricades" (1998) and Mausoleum in Moscow during the 1999 elections. For "Barricades", marking the thirtieth anniversary of May 1968 in France, the artists distributed leaflets using jokey distortions of slogans from thirty years earlier – "Sex Marx/Karl Pistols" – and blocked the traffic while waving their illustrated banners. The government took things more seriously: the artworks were destroyed and the artists arrested.

Since the beginning of his career, David Ter-Oganyan has been concerned with social unrest, working with the concepts of violence, revolt and resistance. He made himself a reputation outside Russia with his series This is Not a Bomb: in discreet corners of the group exhibitions he was invited to show in he placed packages of pickled cucumbers, preserved vegetables or potato crisps, held together with adhesive tape and equipped with a timer so as to generate doubt about their real nature, while also playing on paranoia and the imagery of terrorism.

He have contributed to such exhibitions as "The Individual and the Power", Manifesta 4 (Frankfurt, 2001), "Art without Crime" (Berlin, 2003), "Art with No Excuse" at the Schchusev Museum of Architecture (Moscow, 2004) and "Disobedience" at the Künstlerhaus Bethanien (Berlin, 2005). Ilya Budraitskis, born in Moscow in 1981, is a historian, public law specialist and political activist. An active participant in the socialist VPERED! ("Forward!") movement, he began working in the art field in 2003, in concert with the Radek Community. His works – installations for the most part – offer dramatic assessments of the social and political situation in Russia today, and draw historical parallels. Since 2005 he has been working closely with Moscow artists David Ter-Oganyan and Alexandra Galkina, with whom he has notably exhibited in "Progressive Nostalgia" in Prato, Italy and "The Return of Memory" in Tallinn, Estonia, under the curatorship of Viktor Misiano. The la box project is his fifth in collaboration with Ter- Oganyan.

Viktor Misiano is an international exhibition curator and art critic who began his career in Moscow in the 1980s. Over the period between the institutional vacuum that followed perestroika and the building of today's contemporary art network, he played a decisive role on the artistic and theoretical scene in Russia, notably as the first director of the National Contemporary Art Centre in Moscow from 1992 until 1997. He was also responsible for the Russian pavilion at the Venice Biennale in 1995 and 2003, and at São Paulo in 2002 and 2004. In 1993 he founded the contemporary art review Moscow Art Magazine, still the leading art theory publication in Russia today.

In the 1990s he was a keen observer of the Actionism that characterised the Moscow art scene and which, in his view, was symptomatic of a deeper institutional and relational crisis. But Actionism was also the manifestation of the collective spirit that would be the keystone of artistic practice in Russia in the first decade of the 2000s, with artists reacting to the notion of community not only in their work, but also in their relationship with society as a whole.

Curator of a number of exhibitions around the world, founder of the curatorial practice review Manifesta Journal, and author of books and articles translated into several languages, Viktor Misiano is one of Russia's leading representatives on the international contemporary art scene. In 2007 he was awarded an honorary doctorate by the University of Art and Design in Helsinki. He is currently a Fondation de France guest researcher at the Institut National d'Histoire de l'Art in Paris, as part of the "Art and Globalisation" research programme.

Colocation [Living Together ]
Can artists help us to live together?

The starting point for the "Living Together" programme was a series of invitations by Elena Yaichnikova and Nicolas Audureau to artists to create projects specifically for la box. Each contribution is integrated into the la box space and the economic and social life of the city of Bourges, and raises various questions about the concrete impact of art: the artist's civic and ethical responsibility, reassessment of issues according to context, and specific explorations in the art domain. Plus, ultimately, the need for coexistence based on the sharing of resources.

Implicitly or explicitly the invitees assume a kind of responsibility, a "real" commitment to "real" life, working from the notion that pressing social and political issues call for an ethical stance on the part of citizens in general and artists in particular. But does art really have to take on this responsibility? Torn between utopianism and effectiveness, interventionist artists find themselves in a chronically paradoxical situation: once it becomes effectual, "interventionist" or compromised, does not art lose its specific aesthetic, allegorical, fictional and critical virtues? So can art and artists really help us to live together? And do they have an obligation to try?

Finally "Living Together" homes in on that more or less voluntary form of coexistence – an economic mix of solidarity and survival – that inevitably oscillates between a dubious "communalist" relationship and the conflictual tensions of "every man for himself". Just as the individual is perpetually at odds with the collective in terms of his interests and survival, the artist's singular mode of functioning both clashes with the dominant fictions and suggests new relationships. Hopefully, the duration of the "Living Together" programme will be marked by an artistic "community of thinking".

Elena Yaichnikova, born 24 June 1979 in Moscow, studied history and the history of contemporary art at the Lomonosov State University there. She worked as an assistant for internationally known artists at the first Moscow Biennial of Contemporary Art in 2005, then took out her curator's diploma at the Magasin Contemporary Art Centre School in Grenoble, France in 2005–06. In 2007 she was again an artists' assistant at the second Moscow Biennial. She is a regular contributor to such Russian and international art publications as Moscow Art Magazine, Wallpaper and Jalouse, and to catalogues for artists and exhibitions.

Nicolas Audureau, born 29 April 1977 in Paris, took out his Masters in the Science and Technology of Contemporary Art Exhibitions at Rennes University II, then contributed to the programming and worked as artistic coordinator at the Festival Accè(s) in Pau, France in 2003 and 2004. He went on to organise the "Warm Up" project in Pau in 2005, as an independent curator. He writes from time to time for Archistorm, ArtPress, Ars Nova and other French art publications, as well as for catalogues and exhibitions. In 2006 and 2007 Elena Yaichnikova and Nicolas Audureau collaborated on a number of projects for the AgourtchiK! collective, among them the exhibition Free Party (1 & 2), held at the Moscow Art Centre in November 2006 and the National School of Art in Grenoble in March 2007.

With the backing of the Ministry of Culture and Communications, the Centre Region Cultural Affairs Department, the City of Bourges, the Centre for Cultural Studies and Development, and the French Embassy in Moscow. And with the cooperation of the Prometeo gallery in Milan