The most recent paintings and works on paper of the Chinese artist. In concentrating his palette on the colour red, he defines the common thread of the show. Since the end of the 80s, Ding Yi has devoted himself exclusively to working with the theme of the cross + and x which he exploits to its maximum potential. 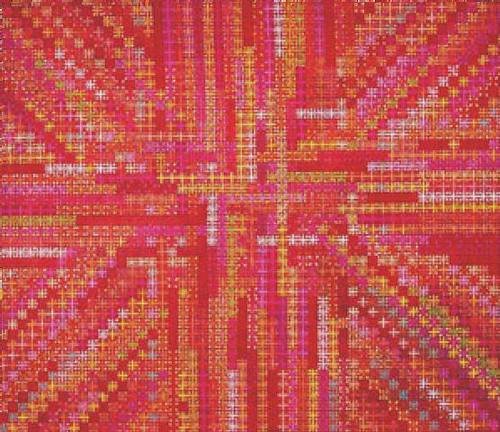 For his first solo show in France, the Karsten Greve Gallery is pleased to present the most recent paintings and works on paper of the Chinese artist Ding Yi. The artist created a group of works especially for this exhibition. In concentrating his palette on the colour red, he defines the common thread of the show.

Since the end of the 80s, Ding Yi has devoted himself exclusively to working with the theme of the cross + and x which he exploits to its maximum potential. All these works are the proliferation of the small signs repeated according to a systematic principle. Devoid of narrative or symbolic significance, the approach to painting does not seek any sort of emotional expression, but instead is reduced to it’s minimal state. Nevertheless, if Ding Yi painted with an extreme precision at first and used rulers in order to avoid any personal touches, his surfaces are now much more free.

The quasi obsessive simplicity of this choice stands in opposition to the incredible variety of his abstract paintings using acrylic, oil, chalk, wood coal, ballpoint pen and a wide-ranging palette from almost monochrome to vibrations of the most vivid tones. The interlacing of the crosses creates a depth as well as a movement across the canvas with a network of segments which superimpose themselves according to different directions. This weft is all the more accentuated from the end of the 90s, when Ding Yi uses fabric as a base, especially tartan, which already contains its own pattern. The crosses may appear as a weaving of time and space, the point at which two lines meet is traditionally used to mark a location.

A wonderful dynamic is born out of the tension between formal variety and the minimal nature of the structural elements. Animated by an obsession with precision as well as by the irregularities produced through manual realisation, these “technical paintings” according the expression of Hou Hanru, react as a living body. The work is never the result of a mechanical reproduction, but rather of a delicate manual process. His paintings have also been seen as an accumulation of a sort of manual writing, reminiscent of a traditional savoir-faire or of the Chinese calligraphy practice.

If Ding Yi developed a personal type of painting at a very early stage which was largely unknown to the trends, he was also more reactive, since 1999, to his surrounding environment. The urban nature of his work reminds one of the neon signs of Shanghai as well as the excitement of the bustling city. It could be considered as a contemporary Chinese version of Mondrian’s Broadway Boogie Woogie, as suggested by Jonathan Watkins. The artist has always had a talent for integrating a variety of references in a very personal way, whether it be from the preceding generation of Chinese artists or western influences such as those of Mondrian to Newman, from Pollock to Warhol, which he discovers gradually. The Cultural Revolution starts four years after his birth and the young Ding Yi sees images of propaganda multiply rapidly. Whereas contemporary Chinese art was always intimately linked to the socio-political framework, Ding Yi stayed away from the turmoil and maintained a steadiness in his work. This unique position is witness to a radical independence vis-à-vis the art world and a society governed by the cult of the image.

Ding Yi, born in 1962, lives and works in Shanghai and enjoys international recognition. He participated in the Venice Biennale (1993), the Yokohame Triennale (2001) and in the Guanghou Biennale (2002). An individual exhibition has been dedicated to him at the Ikon Gallery (Birmingham) in 2006 and the MAMbo in Bologna is currently preparing an important exhibit for January 2008.