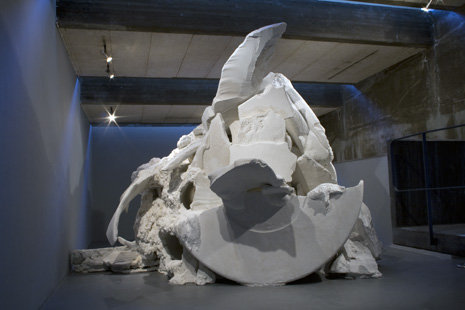 The third and final movement in a trilogy of site-specific sound-focused installations, Sediments, Sentiments (Figures of Speech), on view until 15 December 2007 at SFAI’s Walter and McBean Galleries, carries forward lines of investigation Puerto Rico–based artists Jennifer Allora and Guillermo Calzadilla opened first in Clamor (at the Moore Space in Miami in 2006) and then in Wake Up (at the Renaissance Society at the University of Chicago in the spring of 2007). The trilogy of exhibitions comprises a series of works that counterpose militarism and war with adroit manipulations of sound, music, and--in this new project for the first time--spoken word.

Strategically seeking out the sounds of combat as their sonic media, Allora & Calzadilla redeploy petrified, if still petrifying, riffs like reveille in ways that fundamentally challenge the ostensible glories the drumbeats of war traditionally encode. Part of their collaborative task has been to track such martial sound effects to their precognitive hideouts “under the skin,??? where the body is agitated and stirred before the mind has had a chance to reflect--the hangouts, in short, of an unthinking patriotism. Allora & Calzadilla’s endeavor to reissue sounds whose meanings have grown far too familiar is an effort to restructure, at the source, those corporeal conformities, always marked in and on the body already, through which violent and potentially devastating action first becomes possible. In the new work for the Walter and McBean Galleries, this same system of undoing is set in motion against the equally inured fixations of the word--from the grain of the speaking voice to the artificial diction of operatic language and political oration.

Never limiting themselves to a single medium, Allora & Calzadilla complement their far-resonating, site-sensitive interrogations of sound and word with a suite of recent works in video: Returning a Sound (2004), Under Discussion (2005), Amphibious (2005), Sweat Glands, Sweat Lands (2006), Unrealizable Goals (2007), and There Is More Than One Way to Skin a Sheep (2007), the last of which recently premiered at the 10th International Istanbul Biennial. As a literal testimony to their thematic precedence in Allora & Calzadilla’s oeuvre, these videos were placed on view starting 2 October in the Walter and McBean Galleries, two weeks before the opening reception of the exhibition itself on 18 October (the reception included, as a prelude integral to the full unfolding of the exhibition, a live operatic interpretation of texts selected by the artists and performed by students from the San Francisco Conservatory of Music). The preem ptive presence and visibility of Allora & Calzadilla’s video work--in particular, Returning a Sound--were meant to reinforce the deeper context of the ensuing installation, namely, Allora & Calzadilla’s active participation, from 2001 to 2004, in the acts of civil disobedience in Vieques (the island off Puerto Rico used by the US Navy as a weapons-testing range from 1941 to 2003) that eventually led to its partial evacuation by the US government.

Consistent with the comprehensive rearticulation of SFAI’s Exhibitions and Public Programs, which look beyond the traditional histories and narratives of exhibition and curatorial practice, Allora & Calzadilla were invited to exploit, as fully as possible, the intricacies of the SFAI campus, to conceive of it, in other words, as what Hou Hanru, SFAI’s director of Exhibitions and Public Programs, has called “a dynamic site of production instead of a static venue for mere representation.???

Sediments, Sentiments (Figures of Speech) occurs under the Global Figures component of SFAI’s Exhibitions and Public Programs, which is divided into five discrete but intersecting directions for investigating current constructions of contemporary global culture. Global Figures presents solo exhibitions of major artists from different cultures who have importantly influenced the current global art scene. The third and final movement in an ideologically critical, three-city trilogy, Sediments, Sentiments (Figures of Speech) could literally not have assumed the concrete, site-specific form it has in fact assumed anywhere else than at the Walter and McBean Galleries. The entire project will be captured and reflected upon in a joint publication slated to appear in 2008.

In addition to the installation in the Walter and McBean Galleries, Allora & Calzadilla gave a talk on 17 October as part of SFAI’s Visiting Artists and Scholars Lecture Series.

Allora & Calzadilla first exhibited internationally in 1998 at the 24th São Paulo Biennial. In group exhibitions they have shown at the Tate Modern in 2003, the 2005 Venice Biennial, and the 2006 Whitney Biennial. In solo exhibitions they have shown or will show at the Walker Art Center in Minneapolis (2004); the ICA in Boston (2004); the Palais de Tokyo in Paris (2006); the Serpentine Gallery in London (2007); the Renaissance Society at the University of Chicago (2007); the Whitechapel Laboratory in London (2007); the 10th International Istanbul Biennial (2007); and the
Lyon Biennial (2007).

SFAI’s exhibitions and public programs are supported in part by the Andy Warhol Foundation for the Visual Arts, the Peter Norton Family Foundation, and the Grants for the Arts/San Francisco Hotel Tax Fund. Sediments, Sentiments (Figures of Speech) is sponsored by the Franco Soffiantino Gallery in Turin, Italy, and is presented in collaboration with the Renaissance Society at the University of Chicago and the Moore Space in Miami. It is also presented concurrently with the exhibition Apocalypse Now: The Theater of War, co-curated by Jennifer Allora, Guillermo Calzadilla, and Jens Hoffmann at CCA Wattis Institute in San Francisco, on view from 30 November 2007 to 26 January 2008.

Founded in 1871, SFAI is one of the oldest and most prestigious schools of higher education in contemporary art in the US. Focusing on the interdependence of thinking, making, and learning, SFAI’s academic and public programs are dedicated to excellence and diversity.

SFAI’s School of Studio Practice concentrates on developing the artist’s vision through studio experiments and is based on the belief that artists are an essential part of society. It offers a BFA, an MFA, and a Post-Baccalaureate certificate in Design+Technology, Film, New Genres, Painting, Photography, Printmaking, and Sculpture/Ceramics.

SFAI’s School of Interdisciplinary Studies is motivated by the premise that critical thinking and writing, informed by an in-depth understanding of theory and practice, are essential for engaging contemporary global society. It offers degree programs in History and Theory of Contemporary Art (BA and MA), Urban Studies (BA and MA), and Exhibition and Museum Studies (MA only).