The career of an eclectic artist / Resonances I 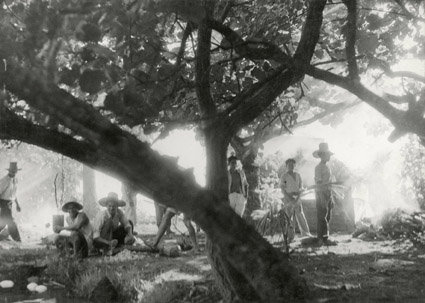 In addition to presenting over two hundred photographs, drawings, publications, book designs, and working documents, the Roger Parry exhibition at the Hôtel de Sully seeks to shed light on the career of an eclectic artist who was not only a photographer and draughtsman, but also illustrator, advertising artist, designer, reporter, and art director.
Parry's explorations and innovations in the realm of photography, often developed in conjunction with other practices, found a particularly rich outlet in the publication of art books.

Indeed, his talent for page layout and the relationship between a photograph and its support — between image and text — is the guiding thread to this show.


Early years and the art scene

Roger Parry (Paris, 1905 - Cognac, 1977) received an art education notably focused on the graphic and decorative arts. He discovered the potential of photography in 1928 on meeting Maurice Tabard, who had just returned from a long stay in the United States. As an experienced professional photographer close to the Surrealist movement, Tabard was a French representative of the “new vision” that favoured the specificity of the photographic idiom. In a period when the barriers between media and techniques were breaking down, many artists identified photography with modernity. Parry was enthusiastic about the experiments he carried out with Tabard, and when in 1929 the latter became head of Deberny-Peignot, an upscale advertising agency, Parry was hired as his assistant. The pair worked together exploring multiple compositions, effects of lighting, angles of view, superimpositions, and negative prints - it hardly mattered who took credit for a given work.
Starting in 1931, Parry was responsible for promoting novels published by the Nouvelle Revue française (NRF). He mounted his photographs on cardboard supports, accompanied by excerpts from the books they illustrated, placing them in bookstore windows and running similar ads in the press. During the inter-war period NRF also commissioned Parry to design over two hundred covers for its popular imprints. He thus devised compositions featuring his wife Madeleine, himself, or his friends, which he then reworked, retouched, and colourised.
Yet Parry's true entry into the world of publishing had occurred earlier with Banalité, a luxury edition of a poetic text by Léon Paul Fargue, published in 1930 at the initiative of André Malraux (then art director at Gallimard). Sixteen photographic compositions by Parry illustrated the two editions: a run of thirty copies containing original prints, and another of three hundred with photogravures. Fabien Loris collaborated with Parry on five photograms that the two friends dubbed réogrammes to stress the role of the objects or “things” placed on the light-sensitive paper so that their shadows would create the image. In other plates, Parry depicted everyday objects, but he favoured anti-naturalist techniques, using lighting or the reversibility of the photographic medium to create equivalents to the dream-like nature of Fargue's text.
Hailed by the critics, Parry participated in several exhibitions in 1932, including Surrealism and Modern European Photography at the Julien Levy Gallery in New York, a major centre for the promotion of photography. The latter show inspired Parry to devise a rebus in which newspaper headlines, “York” for New York and “Paris” for Parry, along with a picture of an old pair of shoes, sparked a new interplay between text and image. Parry was interested in ordinary things and gave an enigmatic dimension to straightforward still lifes such as “the starfish and the paper cutter”. His portraits, in contrast, whether of friends or writers (at the request of Gallimard) often played on the medium's specific resources-cropping, overprinting, and superimposition - as well as a highly pictorial use of solarisation developed by Tabard.


“Documentaries” and the press

Parry did many drawings, an art influenced by his photography. His travel sketches testify to a snapshot-style technique when drawing people he encountered in Africa (1930) and Tahiti (1932), done with an acuity and occasionally harsh humour perhaps evocative of certain Dadaist traits. Parry's mastery of framing and contrast furthermore testified to his technical versatility. His drawings and photographs of Africa and Tahiti do not pander to exoticism, for they were inspired by the documentary approach of the day - his pictures of Africa bear similarities to Voyage au Congo, filmed by Marc Allégret and André Gide in 1925. An album published in 1934, Tahiti, includes 106 plates that presented an unvarnished portrait of the cultural, economic, and social conditions on the island; the page layout, conceived with Malraux, prefigured the ones Parry would do years later when photography played a crucial design role. Parry progressively abandoned his earlier formal explorations even as he confirmed his interest in the relationship between words and image - the pictures he took in the Netherlands in 1938, for example, were conceived as visual translations of Jeff Last's novel, Zuyderzee.
During the war, having been declared unfit for service in 1939, Parry worked on the staff Match and Marie-Claire, and later published regularly in La Semaine, the leading entertainment weekly during the German occupation. His pictures presented a strangely carefree image of that period. At the same time, however, he discreetly denounced the Nazi presence through photos he would publish at the Liberation in the multi-author book, À Paris : Sous la Botte des Nazis. Indeed, as the liberation of Paris neared, Parry joined the press photographers' Comité de Libération, headed by Henri Membré. He then became Membré's deputy at the photo department of Agence France-Presse that same year. Parry authored two photo-spreads, one on General de Gaulle's official visit to New York in 1945, and another on the Moscow Conference in 1947. However, his adventures as a press photographer, for which he had little affinity, did not last very long, since the AFP closed its photo department in November 1947.

First approached by Malraux as the photographer for Psychologie de l'art (Geneva: Skira, 1948), Parry steadily began contributing to the graphic design and illustration of Gallimard imprints such as “La Galerie de la Pléiade” and especially, from 1957 onward, “L'Univers des formes,” for which Parry did the dummies of the initial volumes, later becoming both art director and technical director of the series. He was the true coordinator charged with translating Malraux's aesthetic concepts into layout and illustration. He was able to find the pictures and then employ retouching, colour, and montage techniques to create reproductions that visually reinforced Malraux's arguments on similarities or differences in artistic style. To facilitate the reproduction of certain hard-to-access works, Parry would go so far as to make copies of works by Leonardo, Goya, and Rembrandt (such as a detail from Rembrandt's Pallas Athena, gracing the cover of L'Irréel). For the "Univers des formes" series, he gave photography a key role in overall page layout, exploiting visual comparisons between works. He also explored the visual and spatial effects produced by multiple viewpoints of the same figure. Faithful to Malraux's idea, these books functioned like a virtual museum that made all kinds of connections possible. The first two volumes, Sumer and Assur, displayed the Parry's outstanding inventiveness as picture editor and layout artist. Although developments in the publishing industry forced him to limit his creative contribution to each book, prior to his death at age seventy-two Parry managed to produced another seven volumes of the series, plus Louis Aragon's Henri Matisse, roman and a new version of Malraux's Métamorphose des dieux.

Resonances I
Museum Folkwang, Essen / Médiathèque de l'architecture et du patrimoine, Paris
since 12 04 2007 until 02 17 2008
Jeu de Paume has invited Ute Eskildsen, curator of the Museum Folkwang, Essen, to cast her eye over the photography collections of France's Architecture and Heritage Mediatheque, with a view to establishing a dialogue between these and the works under her curatorship in Germany.