The group show deals with the changes in today's notions of travelling due to an often mediatized perception of the surrounding world. The 6 selected artworks can be regarded as results of, or comments on, this changed perception and conveyance of the world. Today "The cultural value of urban screens", a lecture by curator Susanne Jaschko. 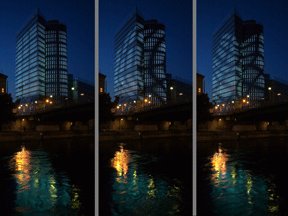 The exhibition Travelling Without Moving deals with the changes in today’s notions of travelling due to an often mediatized perception of the surrounding world. Technological innovation has increased the speed of travel and the range of distances that can be reached in real time. By the same token, the modern traveller has developed a strong desire to feel a connection with home. Mobile devices fulfil this desire, but also disconnect the traveller from his or her surroundings.

One might argue that today’s mobility implies movement on the surface – the surface of the city, the surface of culture. That it means travelling without moving – and perhaps without being moved. The six selected artworks can be regarded as results of, or comments on, this changed perception and conveyance of the world. More than this, they are representatives of a new aesthetics of digital minimalism and condensed experience. [S.J.]

Susanne Jaschko is a Berlin-based independent curator and researcher in contemporary visual and electronic art. She holds a doctorate in Art History. From 1997 to 2004, she was curator and deputy director of the international media art festival transmediale. In 2006, she co-curated the Scape Biennial of Art in Public Space in New Zealand. In the same year, she also co-curated the show Open House. Architecture and Technology for Intelligent Living produced by Vitra Design Museum and Art Center Pasadena.

In 2007, she initiated and curated the exhibition series urban interface, an on going exhibition and research project which situates artworks at the interspaces between private and public space, so far having taken place in Berlin and Oslo. In addition, she curated Urban Screens Manchester 07, an international conference and public art programme exploring the cultural value of public displays and moving image in the urban environment. She has lectured and taught internationally on subjects such as the digital image and interactivity in art.