This exhibition revolves around a specific choice of pictures from 1997-2006, on canvas and wood. The emphasis here is on Adach's distinctive treatment of history via autobiography, fiction and a transcending of the figurative. 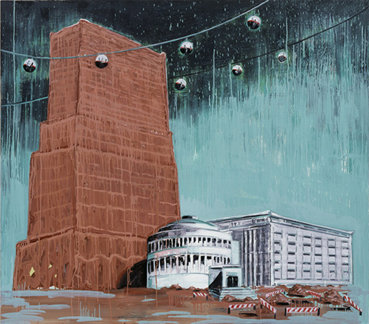 La Galerie, Contemporary Art Centre in Noisy-le-Sec, has invited Adam Adach to present his first solo exhibition in an art institution of Paris Region. Of Polish origin, Adam Adach took his diploma at the École des beaux-arts in Paris in 1995. In France, his work had drawn attention in various group exhibitions – "Urgent Painting", ARC-MAMVP, 2002; "Voir en peinture", Le Plateau - Frac Île-de-France, 2003; the hanging of the Centre Pompidou collection, 2004 – but he had not had a solo exhibition since those at the Galerie Jean Brolly in Paris (2003 and 2005), the Chagall Museum in Nice (2005) and the Château des Adhémar in Montélimar (2004).

The Noisy-le-Sec exhibition revolves around a specific choice of pictures from 1997–2006, on canvas and wood. Some of them are large-format and are being shown in France for the first time. The emphasis here is on Adach's distinctive treatment of history via autobiography, fiction and a transcending of the figurative. More so than in the earlier exhibitions, this selection highlights a deliberate uncertainty as to subject matter and constant changes of media that preclude any "style" label. The choice also tends to emphasise the role of abstraction in a pictorial practice nonetheless described as figurative.

The exhibition highlights some of the issues addressed by Adach's work: the civilized as opposed to the natural (Natural State, 2004); man's sometimes hostile relationship with his natural, industrial and urban environments [Low Beam (1997), Ionisation (2005)];the building of a society, whether one really existing between the Soviet era and now [Foundations (2002), Wooden Houses (2005), Meeting Point (2004)], or one dreamed up in science fiction (Aelita Back and Forward, 2006); utopia and its inbuilt element of failure (Utopia, 2004); and lastly the representation of history – especially fascism and other forms of totalitarianism (Ministry of Communication, 2006) – with a view to suggesting rather than portraying historical fact [Untitled (Treblinka), 2004].

Marked by the apparent disparity of media, formats and techniques that characterizes Adach's practice, the works will be grouped together meaningfully in cinema-style sequences. They will be complemented by a site-specific intervention by the artist that takes some of the questions raised by the exhibition out of the gallery and calls on us to reconsider the surrounding reality.