Three exhibitions for the grand opening. 'The Skagen Painters - In a New Light' presents more than 100 works created by artists such as P.S. Kroyer, Christian Krohg and Anna and Michael Ancher. 'Andreas Golder - It has my name on it' is the first comprehensive presentation of the artist's works in Denmark and includes a number of brand new paintings. In addition for the very first time on show Arken's own Collection in a permanent exhibition, including a unique Damien Hirst room. 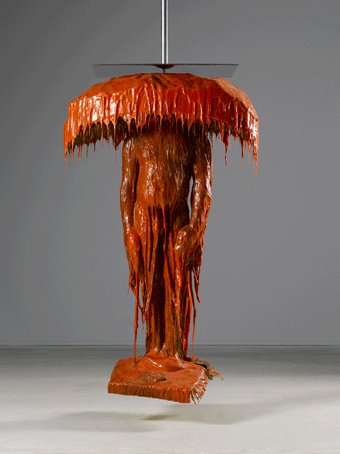 In the spring ARKEN is showing a solo exhibition of the young German-Russian painter Andreas Golder (b. 1979). In recent years Andreas Golder has attracted attention for his very personal painting, humorously and elegantly renewing painting’s potential – conceptually as well as formally and with regards to subject matter.

In Golder’s figurative paintings existential questions of identity and understanding of self are knitted together with absurd and humorous stories of everyday life. Anything from strong headwind to shopping sprees, catwalks and nose picking are valid subjects. The usually solitary figures race along, leaving deep tracks in the thick paint, or are captured in serene moments of lonely wonder.

Golder’s paintings are twisted portraits and grotesque mirror images of the human condition and of the culture we have constructed around us. With great technical scope he incorporates in his pictures everything from photographic snapshots to writing and objects. His paintings allude to prominent role models such as Francis Bacon, Philip Guston and Per Kirkeby.

The exhibition is the first comprehensive presentation of Golder’s works in Denmark and includes a number of brand new paintings, created specially for ARKEN’s exhibition.

ARKEN collects Danish, Nordic and international art with special emphasis on contemporary art, i.e. works from 1990 onwards. There are two unifying principles in the Collection: one is art concerned with the existence of modern man, the other focuses on art that via new forms, materials and media explores the very definition of art.

ARKEN owns one of Denmark’s most significant collections of contemporary art in the Danish museum world. It has been a long held wish to be able to permanently present the Collection to the museum’s guests. With the museum’s extension, ready in early 2008, it becomes reality.

We know the Skagen Painters’ light, bright pictures of festive gatherings for the members of the artist colony, and their grandiose depictions of the local fishermen’s harsh life on land and at sea.

However, were their portrayals of life among artists and fishermen on Skagen in the late nineteenth century authentic testimonies or staged pictures? What, for instance, do the Skagen Painters’ famous works say of the artists’ self-knowledge and of the relationship between the modern painters and their favoured subject – the fishermen? This is the theme of ARKEN’s great spring exhibition, inaugurating the museum’s new extension in 2008.

The opening of The New ARKEN takes place on Friday 25 January, 5.