Volume(s) tries to capture those moments where sound or music manifest themselves in the visual realm. These moments-turned-artworks populate the space of an exhibition, divided into 3 groups that could be symbolised by the frequency ranges of an equalizer. Marion Moller creates two-dimensional counterparts of ornamental shapes, which she has removed from their daily context, and hence, from the flow of time. The P2P project deals with the notions of reproduction, perpetuation and circulation of shapes, gestures or processes in space and in time. The show aims at applying the peer-to-peer system to the display of artworks and the exhibition in general. 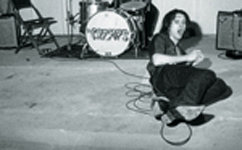 VOLUME(S) tries to capture those moments where sound or music manifest themselves in the visual realm. These moments-turned-artworks populate the space of an exhibition, divided into three (permeable) groups that could be symbolised by the frequency ranges of an equalizer.

The bass segment represents the basics. Artists explore the realms of physics and computer programming looking for means to transform sound into a distinct visual impression. Surprisingly, the fascination with technology and scientific rigour that characterise these objects often produce synaesthetic and uncanny outcomes.

In the middle range, strange presences try to reconcile the universe of sound with tangible space. The main characteristics of these works is a playful approach akin to the relation artists entertain with their working instrument, allowing both the body and mind to contribute to the implementation of their ideas. Thanks to human intervention, the two volumes – sound and space – can merge. By making this playful vector explicit, and by requiring physical participation, these interactive devices transfer some of the artistic experience onto spectators.

The higher frequencies host more volatile melodies of a specific cultural context. The works in this exhibition refer to the complex structures invented by popular culture and the record industry in order to make musical “phenomena” visually tangible (and sell them). The perception of these polymorphous cultural and promotional structures, characterised by the phenomenon of the fan or the music amateur, is often analysed with an element of subversion. Part nostalgic part caustic effigies of popular culture, these works are either characterised by a high degree of technicity and meticulous handiwork, if not downright “fervent admiration”, or look as though they had been “thrown” into daily reality. All the works in this part of the exhibition pay tribute to the sentimental value of popular music, which continually leads listeners to devise visual representations, potential icons of their generation. This section might look like a teenager’s bedroom, especially since some of the works it contains also address the dark side of fan culture, i.e. the impossibility of the listener’s creative expression – though this situation is not wholly irrevocable.

Architectural ornamentation can be found in nearly all urban spaces. Although traditionally incorporated into the very fabric of architecture, ornements are hardly noticed today. Marion Möller creates two-dimensional counterparts of ornamental shapes, which she has removed from their daily context, and hence, from the flow of time. A small snapshot next to each form thus created refers back to the original place and context.
The ornament’s double existence – in the exhibition and in the public space – establishes a link between the two places. Through their presence, visitors connect both spaces, both presences, and thus take an active part in the work.

Conceived by Le Bureau/ (a French group of curators), the P2P project deals with the notions of reproduction, perpetuation and circulation of shapes, gestures or processes in space and in time. The exhibition aims at applying the peer-to-peer system to the display of artworks and the exhibition in general. Concepts related to the circulation of artworks, the context of their visibility, their accessibility and their appropriation, is made perceptible through an exhibition driven by a system of exchange of artworks. In the framework of the peer-to-peer, a digital file (music, film, picture or text) offered on the Internet, can be downloaded on the hard disk of anyone connected to the network. The multiplication of possible spaces, supports and publics for each element makes it exponential. This established fact existing in the circulation of files through the Internet could be experimented on the scale of artworks and their effective exhibition.

Series, multiples, or copies are some of the many ways to transfer an artwork. These various forms of artworks necessarily relate to the notions of quotation, repetition and reminiscence. The circulation of a shape can thus be considered in different ways: in function of the format (unique work, series, multiple) of the artwork, of the repercussion triggered by the repetition of a gesture, but also in its internal referential construction. It is both the notion of author and that of the value of the artwork that appear here, confirmed, or on the contrary invalidated by the reproduction of the object or part of it. During the project, the exhibition P2P will evolve so as to formalize these concepts.

During the exhibition, le Bureau/ will activate a network of exchanges gathering mainly art centres or museums from various European countries. The initial exhibition presented at the Casino Luxemburg will evolve all along its duration with the addition of artworks coming from the network but also, with the withdrawal of others put into circulation in the same network. The exhibition P2P, by experimenting a form inspired by the functioning of the peer-to-peer, will offer the spectator a multiple reading of the artworks and of the conditions of their display.