A group exhibition featuring work from the past five decades by a selection of international artists who use collage, assemblage, and recombination in the creation of their sculpture. With particular focus on materiality, abjection, viscerality, and process, they present an engagement with found and appropriated materials that range from the strongly formal to the decidedly intuitive. 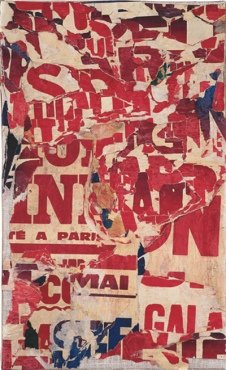 “...the ‘jésuvian’ process, in some places described as the castration complex, in others, that of Icarus’s challenge to the sun, a process of movement upward as a defiance of the top that, in its very ridiculousness, becomes powerfully attractive, attractive because repellant, high because lower-than-low.” (1)

Elizabeth Dee Gallery is pleased to present Jesuvian Process, a group exhibition featuring work from the past five decades by a selection of international artists who use collage, assemblage, and recombination in the creation of their sculpture. With particular focus on materiality, abjection, viscerality, and "process" (or anti-aesthetic), the works in the exhibition present an inter-generational engagement with found and appropriated materials that range from the strongly formal to the decidedly intuitive. A certain kind of energy is evoked by these works; an energy that is perhaps best characterized as "jésuvian," a term elucidated by the art historian Rosalind Krauss in her famous treatise on formlessness in art. A broad, yet provocative phrase in terms of its connotations, it can be associated with the body, mythology, and psychology. Jesuvian celebrates the triumph of the low, the obstreperous, and the deviant over the refined, the privileged, and the repressed, through an attempt to go beyond standard means and expectations. At a time when many young artists are garnering attention for manifestations of what could arguably be described as the "jesuvian process," this exhibition honors five generations who have recognized the allure of the overlooked, the undervalued and the discarded.

Hany Armanious was born in Egypt in 1962, and currently lives and works in Sydney, Australia. He was included in the 1993 Venice Biennale and the 1995 Johannesburg Biennale. He has had solo exhibitions at the Hammer Museum, Los Angeles, CA and Foxy Productions, New York, NY.

Bruce Conner was born in McPherson, Kansas in 1933. His films, assemblages, drawings and photographs were the subject of a major 1999 traveling retrospective exhibition presented at the Walker Art Center, Minneapolis, MN; The Modern Art Museum, Fort Worth, TX; the DeYoung, San Francisco, CA; and the Museum of Contemporary Art, Los Angeles, CA.

Hilary Harnischfeger was born in Melbourne, Australia in 1972. She lives and works in New York. Her work was included in The Line of Time, And the Plane of Now, Harris Lieberman and Wallspace Gallery, New York, NY; You Are Here, Ballroom, Marfa, TX; Hunch & Flail, Artists Space, New York, NY; and Pertaining to Painting, Contemporary Arts Museum, Houston, TX.

Paul Lee was born in London in 1974. He lives and works in New York. He has had solo exhibitions at Chinati Foundation, Marfa, TX; Peres Projects, Berlin; and Massimo Audiello, New York, NY. His work has been included in exhibitions at Bortolami and Team Gallery, New York, NY.

Louise Nevelson was born in Kiev, Russia in 1899. In 1920 she moved to New York, where she died in 1988. Her work was included in the groundbreaking exhibition Sixteen Americans at the Museum of Modern Art in 1959 and the Venice Bienniale in 1962. She has been the subject of major monographic exhibitions and retrospectives at the Whitney Museum of American Art, NY; the Walker Art Center, Minneapolis, MN; the Museum of Fine Arts, Houston, TX; and The Jewish Museum, NY.

William J. O’Brien was born in Chicago in 1975. He has had solo exhibitions at Shane Campbell Gallery, Chicago, IL and Locus Projects, Miami, FL. In addition, he has participated in Makers and Modelers at Gladstone Gallery, New York, NY; and So Wrong, I’m Right at Blum and Poe, Los Angeles, CA.

Sterling Ruby was born in Bitburg Germany in 1972. He lives and works in Los Angeles. His work has been included in the Moscow Biennale for Contemporary Art, The California Biennial, and The Turin Triennial. He has exhibited at Tate, Britain; The Renaissance Society, Chicago, IL; and has had solo exhibitions at Foxy Productions and Metro Pictures, New York, NY.

Jacques Villeglé was born in Quimper, France in 1926. He lives and works in Paris. He has had recent solo exhibitions at Musée d'Art Contemporain, Lyon, and Galerie Georges-Philippe & Nathalie Vallois, Paris. He has participated in numerous shows at museums in Europe and the US, including Centre Pompidou, Paris; Musée National d'art Moderne, Paris; PS.1, NY; Museum Ludwig, Cologne; MUMOK, Vienna; and The Museum of Modern Art, NY.