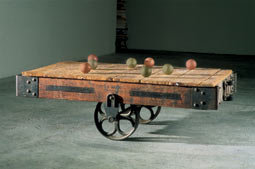 Jennifer Bacon and Filippo Fossati are proud to present a solo exhibition of San Francisco based artist Paul Kos.

The show is the first by Paul Kos in a commercial gallery in New York since 1976 at Leo Castelli and features four major installations and a number of smaller works which span the period from 1971 to 2008.

Born in Wyoming, Kos moved to Northern California—a hotbed of artistic innovation and one of the cradles of the Conceptual Art movement—in 1962 becoming one of the pivotal figures in the West Coast's art world. His early experiments were in sync with those of fellow Bay Area artists such as Terry Fox, Howard Fried, Tom Marioni and David Ireland. Along with Bruce Nauman and Vito Acconci, Kos was among the first to incorporate video and sound into sculptural installations. Calling himself a “materials-based” conceptual artist, Kos chooses whatever he needs to produce a desired effect. Enigmatic, humorous, and serious all at the same time, his multifaceted works draw us in, sometimes requiring our physical involvement and always sparking us to rethink our assumptions and perceptions. Seeing the world anew, Kos asserts that “everything matters,” but not always in the ways we presume.

Paul Kos works in a bare minimum of thickness, at the very limit between container and content, on a ''skin'' or ''peel'' which is a sort of no man's land, thus guaranteeing himself an opportunity for constant analysis, for re-enumerating the various pieces as elements in a tautology. This gives to Kos's work a highly sophisticated dialectic, a pulsion between two extremes without any ''relativity'': without any mathematic relationship between the whole and the part.

''On n'a jamais vu le monde si l'on na pas rêvé ce que l'on voyait'' as Bachelard once wrote: and the phrase comes in handy when dealing with Paul Kos. What has been seen and what has been seen in a dream split the world in two; but what is the relevance of each of the two? It is not possible to measure the relative strength of the two extremes; one fuses into the other for as soon as one places them side by side the perception of the differences simply disappears, and one is left with a bitter, sharp sensuality, without thickness or density, a lingering after taste of something lost.

But was has been lost? In Paul Kos's game, perception and emotional sensitivity to the world are disturbed and whirled about as in a centrifuge; and something new is created, a new presence which comes on the scene as the former presence vanishes, with a feeling of emptiness. Between the former and the latter presence is a pulsation which downgrades sense and recovers sensitivity; the former is personalized, the latter anonymous. The pulsation is precisely this emptying, this becoming faceless, the changing of meaning (or ''sense'') into something not concrete yet solid just the same.

Paul Kos's question seems to be that of the ''presence'' of the work. The video, the sculpture, the painting not as objects or mere images but as frontal impacts which open up a space both different and distant. It concerns the transformation of the object into an image, and the image into visual space, in a pictorial or physical body which lives divided and diverse, in spite of the environment and beyond it. Is the world first dreamt and then seen, or does one see it while one dreams it, or does one dream that one is seeing it in a dream? Whichever is true, there are no signs or signals which fix any one of these ''meanings'' (or ''senses'') which multiply and take their distance from one another.Intellectual fashion have taught us to see art as a way of thinking about art. And this should be taken to the letter as an emblematic, heraldic way of being. For in Paul Kos the attitude, the gestures, the marks, the images, the colors also have about them this feeling of an heraldic element, of recognizability, of non-schematic definition. A sort of announcement which could be stylistic - a Styleme, if you like - which at the same time alludes to an intention, to a specific content.

Paul Kos was born December 23, 1942, in Rock Springs, Wyoming. he He lives and works in San Francisco.

Paul Kos is associate professor in the New Genres department of the San Francisco Art Institute where he was also a graduate and an undergraduate (BFA 1965, MFA 1967). His work in a variety of media has earned him numerous awards, including Louis Comfort Tiffany, Rockefeller, Guggenheim, Flintridge Foundation, Fleishhacker and numerous NEA Fellowships. Kos’s installations and videos have been shown at the San Francisco Museum of Modern Art; Capp Street Project; Leo Castelli Gallery, New York; M.H. de Young Museum, San Francisco; Walker Art Center, Minneapolis; Paris Biennale , Sao Paolo Biennale and Gallery Paule Anglim, San Francisco. “Everything Matters”, a traveling retrospective of his work, was organized by the University of California Berkeley Art Museum in 2003 and it traveled to the Grey Art Gallery, NYU in New York, to the Museum of Contemporary Art in San Diego in 2004 and to the Contemporary Art Center in Cincinnati also in 2004.