Annette Sonnewend, Christina Tsilidis, Anita Witek. The exhibition unites 3 artists whose source of inspiration accesses material from literature, film or Star business. Deconstruction, reconstruction and transformation, as well as the linkage of these with formal and thematic specifics in the work of the artists, lead to exciting, independent picture worlds. 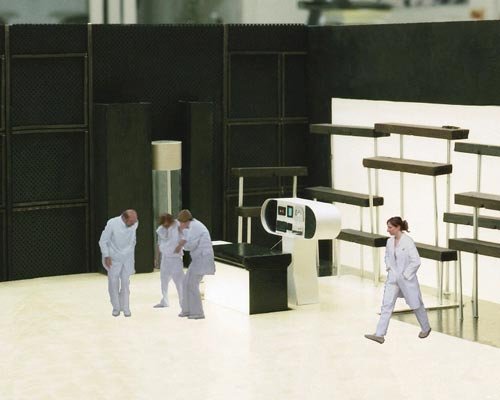 Role models unites three artists whose source of inspiration for their work, shown in this exhibition, accesses material from literature, film or Star business. Deconstruction, reconstruction and transformation, as well as the linkage of these with formal and thematic specifics in the work of the artists, lead to exciting, independent picture worlds.

Christina Tsilidis questions and analyzes in her video work icons of the film and Pop industry such as Catherine Deneuve or Michael Jackson. Strategies of the film and celebrity machinery lead to the formation of myths and are also used in product advertising. The longing after myths and mystification in order not to say – we are being deceived - is a fact in our society. Christina Tsilidis examines in her work, what is behind this longing. Her videos are basically as well as technically a „one woman show “. Scenes or fragments from films and video clips are isolated, thus transferred into a private, sober- unglamorous atmosphere converted by means of the simplest film language.

Annette Sonnewend pushes the envelope further into the fictional, creating her own roles when she appears as protagonist in well-known films. She selects a short sequence from four films of different genres and eras of origin, outlines the setting and copies a model true to scale of the spatial situation. The idea to create a new reality and to be able to acquire the room as a timeless person underlies the reason for the reconstruction of the film set. In one-minute short films the artist meets with the original actresses of the film. Premeditated reality and new staging becomes woven into one another.

With the finely delineated multi-layered photo work of Anita Witek, based on the novel „Aminadab“ by Maurice Blanchot - the circle closes. Anita Witek doesn’t even enter her new world, she entices the visitors to lose themselves into a collage-like reconstruction. Also the protagonist in the novel walks and glides through an unimaginable universe, similar to sliding through the illusionary worlds produced by the advertising industry. The raw material for Anita Witeks surreal image spaces are adverts from magazines and newspapers. The titles of the individual pictures are borrowed from the novel’s sentence fragments and stand in close relation to specific areas traversed by the protagonist Thomas.