Collection as Aleph. The exhibition emphasizes the processual reading of the act of collecting as practice(s), in which combinations and permutations of arrangements create ever new meanings, contexts and relationships between artworks: an attempt to navigate (mentally) the temporal and spatial levels of the Thyssen-Bornemisza Art Contemporary Collection. 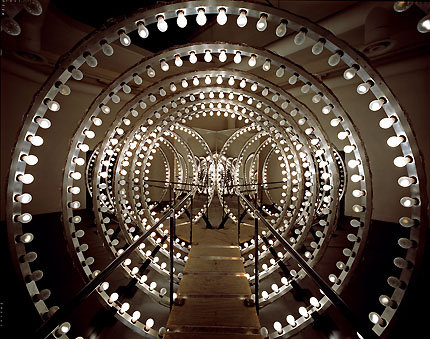 I imagine, in the dawn, I hear a worn
murmur of multitudes, faltering, fading away.
They are everything that has loved me and forgotten;
Space, Time and Borges now are leaving me
Jorge Luis Borges

Four months from its opening, the exhibition-in-progress, Thyssen-Bornemisza Art Contemporary Collection as Aleph has rotated into its second chapter. Structured as Aleph, Borges' notion of a universal space where "all the places of the world, seen from every angle coexist", it includes an endless sequence of potential narratives and conceptual conjunctions, introduced in a performative manner with the audience's participation and in a symbolic synergy with the biomorphic architecture of Kunsthaus Graz.

The exhibition's opening chapter had been choreographed around the motives that unfolded the paradoxes of infinity, spatial fantasies, identity's disorders and mythological translations, and it included the art works of, amongst others, Fiona Banner, Douglas Gordon, Jason Rhoades, Olafur Eliasson, Los Carpinteros, Catherine Sullivan and Haluk Akakçe. The forthcoming chapter narrates tales of inner worlds, imaginary creatures, utopian visions and alternative images of society. From the miniature theatrics of contemporary disasters in Isa Genzken's empire vampire III and the hypnotic report on the ruins of modern times in Olaf Nicolai's Rodakis down to the monumental landscapes of fantasy in Ernesto Neto's Esqueleto Glóbulos and the blurred images of reality-in-transformation in Rivane Neuenschwander & Cao Guimarães' Inventário das Pequenas Mortes (Sopro), the exhibition's trajectory connects myth and reality in an on-going performance of subject ivity under construction.

The flat labyrinth of Jim Lambie's Zobop Gold, which fills up the lobby of Kunsthaus Graz, slowly acquires volume, as the exhibition proceeds and its architecture, conceived by the next ENTERprise, displays well-proportioned density through new spatial organic structures that playfully engage the existing architecture and, at the same time, construct an autonomous habitat for newly introduced art works. Thus the exhibition gradually mutates into a maze, resembling more and more Borgesian structure en abîme, with its paths and avenues leading towards not yet discovered meanings and appearances. The inner coat of mirrors generates the exhibition's uncanny second life as the curatorial process continues bringing in new texts and personages to a heterotopic show as a parable of complex realities and parallel universes.

Kunsthaus Graz is preparing a symposium Structure en abîme. Borges & Aleph which will investigate the importance and influence of the Argentine writer in many areas of human creativity. The symposium takes place on October 24, 2008, with participation of Beatriz Sarlo (cultural critic and author of Borges. A Writer on the Edge, Argentina), Edward W. Soja (geographer and theorist of urban structure, USA) and Carlos Gamerro (writer and translator, Argentina) amongst others.

Founded in Vienna in 2002 by Francesca von Habsburg, Thyssen-Bornemisza Art Contemporary represents the fourth generation of the Thyssen family's dedication to the arts. The foundation is committed to supporting the production of contemporary art and is actively engaged in commissioning unconventional projects that promote research-based, context- and site-specific, performative art practices, often informed by an interest in social aesthetics (http://www.tba21.org).

Joe Colombo
Design and the Invention of the Future
till August 31, 2008
Kunsthaus Graz, Space01
In cooperation with Kastner & Öhler Warenhaus AG
and Graz University of Technology