The gallery presents two solo show: "The night of the gloomy heart" by Paolo Grassino and "How to explain the things I draw" by Aitor Saraiba. Grassino leads us on a regime of partial freedom that cuts, halves, tears thoughts, bodies, dreams, desires, Saraiba dispaly a series of drawing with folk subjects, like spanish divas. 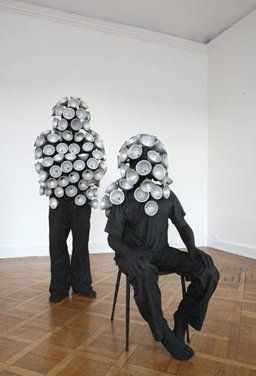 Paolo Grassino: The night of the gloomy heart

Never spectators of a situation in which one finds oneself, never outstripped by experiments whose finality lies in themselves. With Paolo Grassino, we sink our roots in a night of a gloomy heart, with sharp edged lighting, where beauty is an intended strain, and the force of a piece of work an innate process.

Therefore, we enter that dark night already aware that something is waiting for us — that a restless pilgrimage is summoning us. Grassino’s rough sculptures are there, waiting; they have time. Coming from a mute depth, they take out the empty fullness of his image, of his double, which is also ours. Cornered, we resist so that the hollow bottom sustaining them won’t swallow us, as is the case of the human figures drilled by the aluminium tubes that make up a group of works suspended between the stability of being and the movement of becoming. The insurmountable walls formed by those bars nailed into the bodies support, although they are also drilled by, the concrete shapes designed by the artist. It is a sort of coming-through that ends up blocking the movement in its elements. However, it is not just that. There is another, different reading angle to be found in all Grassino’s works from the recent period — although it is less evident. I am referring to the stress put by Grassino on the primary elements that make up shape: point, line, surface. Here, the thing involved is the point, the origin of dimension, and the line as its tightened sequential configuration. The point is nothingness, which generates the very possibility of being. A hole, a black orifice that lumps matter together by attracting it, while in its expansion towards the infinite, brings us back to the transcendent condition of light. In the bodies “bored” by tubes, seen head-on, we notice bright orifices going through them. If we look inside, a glare blinds us. It takes us inside, and, at the same time, it takes us outside, towards the origin of things.

Having caved in the surface, this time we enter into the body, and a piece of venous system greets us with the look of an enormous aquatic beast lying helpless on the floor, but one that could awaken and embrace us with its tentacles, gulping down our vital lymph. It is hardened blood, clotted, lumpy, from the apparent cold of the metal enveloping us in those turbines that separate the soul from the body — although only when we are inside the body, do we discover its inviolability, its perverse fascination. Once inside, when the threshold has been crossed, we understand that any dichotomy disappears, that the interior folds towards the exterior, nature transforms into culture: control over the body through genetic engineering and biocomputing. The surface turns into an articulation of chaos, the line reaches the complexity of all that cannot be represented; the point becomes the digital inorganic zero.

By now, we feel trapped. Grassino leads us on a regime of partial freedom that cuts, halves, tears thoughts, bodies, dreams, desires. A prison, a blue neon light signals it. We cannot surpass the limit imposed by the metallic bars. The tubes cut the space as an electric field; they make the air taut. Visible, they mark the invisible territory of dividing powers, although we do not know who is inside and who outside; who the victim is, and who the executioner. They separate bodies, but not gazes. They are seen, and it might be that the hands almost tend from the “other side” to underline the bond, the tie that binds us, but also the commitment to which we must submit in order to be socially free. But more things wait for us.

Two mutants, one of them standing with folded arms, the other seated, or rather collapsed, into the empty framework of a chair, uselessly longing to communicate with a hundred funnels brightly sprouting here and there like dilated pores. Hammered into the black asphalt of their skin, they are orifices there in place to listen, metallic mouths to breath, where transit is not always compulsory, since there is no rule preventing exchange. The logic governing them is the logic of excess, of the hybrid, dominated by the paroxysmic game of squandering, while our breathing speeds up, our heart rate mounts and the listening goes on until reaching silence.

We have to come back, pushed by the wind of our fears, while Grassino receives us with other experiences. This time, they are almost blunt frames of organic architectures, of whatever is inside the bodies — only there is no body here, because there is no moulding. There is nothing anymore that can gather the intoxicating breath of life, the profane things within the universe. Desire is suspended, frozen, even though it is just for an instant. Now the point is risking and playing with destiny and matter. The challenge consists of eliminating the mould and using the aluminium to form a unique, one-off block. The original and the copy coincide here in a pure shape of lost wax, a mere crystallisation that transforms the sculpture into a process. A slow fusion of a bottomless vacuum, the work is completed as it appears with a dull glistening on the cloak of a night shrouding us, so as to resist.

Aitor Saraiba: How to explain the things I draw

I tattooed the words “Beside you” on my skin as a tribute to Lola Flores, as a tribute to passion and pain, as a tribute to love and sadness, to drama and everything that has no solution at all. Somehow, since I can draw better than I can write, I have always felt attracted to “folclóricas” [heart-rending traditional Spanish flamenco-like singers and performers]. All folclóricas in general, even those who don’t know that they are. Like my sister and grandmother, who inspire me with their sighs for the past and prayers for the future, without ever thinking about the present - and all other big divas who have bordered, enacted, forced and surpassed femininity and transvestism.

Yes, all these are the things driving me to draw the way I do.

“It happened once, it is not quite clear if it was because of some hunters who didn’t believe in love anymore or if they were hunters who were all in love with each other, or if they had a broken heart for some brazen mermaid. What we do know is that for some time men tried to survive in an idyllic way in a forest of some remote place. Their fears and grudges remained there. Also some cannibalism. Also some sadistic spots that spattered about. The trees in this place are still untouched. Lakes and rivers, crystal-clear and pure, still remain, and nothing seems changed at first sight. Flora, stones, climate, everything is untouched by change as yet. It’s the animals. They are the ones going rotted. They have got humanised, and reproduce to perfection the weaknesses of the men they emulated and who sowed seeds all around.”

“By scraps and bits I’ve in the past surrendered myself to strangers - men who disappeared down the gangplank, got off at the next station: put together, maybe they would’ve made the one person in the world - but there he is with a dozen different faces moving down a hundred separate streets. This is my chance to find that man - you are him (…), all of you.”
"The Grass Harp", Truman Capote.

“-Mummy!- called out Bambi in the middle of the snow-covered forest. -Mummy! Where are you?-.
He looked desperately among the trees, but he didn’t see her anywhere. He stopped to listen, anxious to hear her voice calling him, but only the hiss of the wind came through the tree branches. And, at that moment, Bambi understood that now he was alone.”
"Bambi", W. Disney.