Group show. The exhibition looks at the notion of space as a decisive factor in our perception of the realities that surround us. The works on view are re-positioned, re-linked in space-time relative to the "reading" done by each viewer, building alternative paths. 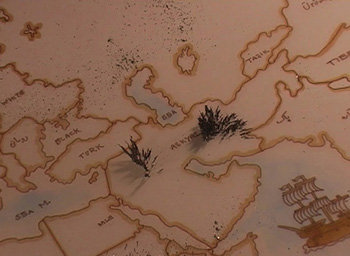 The perceptual re-construction of space is a continuous process, generated by diverse inputs such as our senses, memory, history, consciousness as well as technology. It is a process, consisting of momentary fragments, which are impossible to record. They are temporary, augmented, designed, and loaded.

“Unrecorded” exhibition looks at the notion of space as a decisive factor in our perception of the realities that surround us. The works of Kati London (US), Thomas Duc (France), Laila El-Haddad (Palestine), Dan Phiffer (US), Mushon Zer-Aviv (Israel), Daniel Garcia Andujar (Spain), Zhou Hongxiang (China), Banu Cennetoglu (Turkey), Negar Tahsili (Iran), Kate Armstrong (Canada), and Ali Taptik (Turkey) unfold and restructure all possible perceptual codes through their own inspections, observations, and approaches. They ask questions about the physicality of the space; content of mediatized spaces; clashes between realities and perception of spaces; spaces and situations, discharging information; and narrative spaces.

Exhibition space is deliberately designed to minimize the interaction between the data input of physical space and the audio-visual senses of the viewer, in order to drive the viewer into the realm of each work. Thus, each and every work leads to another, through a unique navigation established by each viewer. In this respect, works in the exhibition are re-positioned, re-linked in space-time relative to the “reading” done by each viewer, building alternative paths. Inevitably, the exhibition takes the phases of informational capitalism, global scenarios for socio-political, cultural and economic gaps into consideration, on each and every visit.

The exhibition will be accompanied by a series of lectures and workshops developed by a group of artists, writers, curators and theorists including Jalal Toufic (LB), Nat Muller (NL), Technologies To The People (Daniel G. Andujar) (ES), Laila El-Haddad (PS), Dan Phiffer (US), and Mushon Zer-Aviv (IL).

6 March 2008 A presentation and talk by Laila El-Haddad (Palestine), Dan Phiffer (US) and Mushon Zer-Aviv (Israel)

You Are Not Here
Laila El-Haddad, Dan Phiffer and Mushon Zer-Aviv will present the You Are Not Here project and discuss the mediated interpretation of space in the context of military occupation and the resistance to it. You Are Not Here project tries to expose the contrasts and the similarities between two cities. Both in the case of Baghdad / New York and that of Gaza City / Tel Aviv while the cities realities are politically involved both the emotional and cognitive perception of these corresponding spaces are completely detached from one another. You Are Not Here attempts to challenge this detachment by providing a mediated experience that still maintains a human scale.

Soft Reality meets Soft Space: An Attempt towards an incomplete Glossary A proposal for interpreting the soft collisions between messy systems of representation and spatial conceptions.

13-14-15 March 2008 A 3 days practical and theoretical workshop/meeting by Technologies To The People. Directed by Daniel G. Andújar (Spain)

DIT "Do It Together" Workshop Series
The Apprehension of reality from the Postcapital Archive This interdisciplinary workshop is open to cultural & media producers, artists, scientists, theorists, activists, and anyone interested in design, visual communication, art, media, and cultural sciences. The objective of the workshop is to facilitate reflection upon the structures of the "public" process, communication methods, and the possibilities these present. It also aims to intervene artistically using modern communication technology methods, and to test new "public" participation models.

You Said “Stay,” So I Stayed
Attending to the film Groundhog Day, Jalal Toufic will lecture on the will and its relation to eternal recurrence. The ordeal of the will is not only that one has to go through countless recurrence and, in the guise of one’s computer emulations or of some of one’s versions in other branches of a bifurcating universe, in desperation commit suicide myriad times; but also that once the will is accomplished, one thenceforth is going to have not only to accept everything that happens, even vast catastrophes, but also, since a genuine will is an ontological selector that automatically renders anything that cannot be willed in the mode of eternal recurrence impossible, to affirm its eternal recurrence: amor fati.

Akbank Art Gallery
Istiklal Caddesi No: 14-18 - Istanbul
Admission is free. Registration in advance is needed for the workshops.