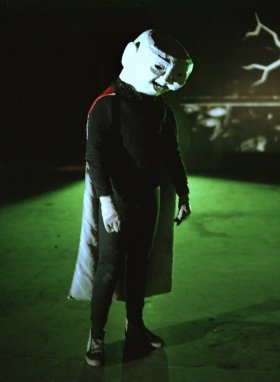 As part of its “interventions” program, an ongoing series of research-based monographic exhibitions of young and emerging artists, MuHKA invited Koen van den Broek [°1973] to curate an exhibition of works of art from both the MuHKA collection and various private Belgian art collections. This exhibition serves as an idiosyncratic context for reflecting upon his own pictorial practice, represented here by a series of paintings from 2007 in which Van den Broek continues to explore the formal possibilities of what has become a well-known signature motif of sorts – images and pictures of ‘grounds’: bottoms, curbs, earth, floors, streets and other supporting surfaces. Van den Broek’s allegiance and intellectual debt to the great traditions of abstract painting are made apparent in his choice of paintings by Mary Heilmann, Robert Mangold and Blinky Palermo, while his affinity with the distinct artistic sensibility of America’s West Coast manifests itself in his selection of works by John Baldessari and Ed Ruscha. Works by William Eggleston, Donald Judd, Thomas Schütte, Jan Van Imschoot and Jeff Wall, as well as MuHKA’s own Flavins and artworks by Charif Benhelima and Jan Vercruysse, complete Van den Broek’s decidedly internationalist vision – the real-life ‘fantasy’ to which the title of this exhibition alludes.

Publication
Angles, a publication by Koen van den Broek featuring texts by MuHKA curator Dieter Roelstraete and the artist himself, will be presented on the occasion of the opening of Fantasy.

Permanent Revolution, a video installation by Berlin-based American artist Sue de Beer [°1973] that is loosely based on the brief but turbulent history of the German Bauhaus. In De Beer’s free-form reconstruction of the school's profound ideological antagonisms, the Bauhaus movement – portrayed here against the apocalyptic backdrop of the Great War which preceded it – sets off an ecstatic, psychedelic ode to colour, light and form. Permanent Revolution is shown in a custom-built white cube painted gold inside – a bizarrely monolithic, alien presence in MuHKA’s futuristic circular space which adds yet another dimension to the great Atlantic art dialogue that will be occupying MuHKA’s ground floor for much of 2008.