Post Party explores the imagery and iconography of the U.S. postal system. Whether it is building a public mailbox from sent parcels, or falsifying postage stamps, making a teepee-sized envelope or a giant rubberstamp of a blank stamp, Solomon erects monuments to a soon-to-be extinct mode of communication. 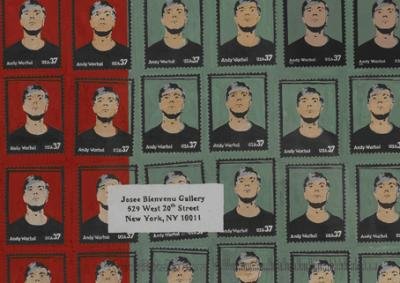 Josée Bienvenu gallery is pleased to present Post Party, Ken Solomon’s second one-person exhibition. Post Party explores the imagery and iconography of the U.S. postal system. Whether it is building a public mailbox from sent parcels, or falsifying postage stamps, making a teepee-sized envelope or a giant rubberstamp of a blank stamp, Ken Solomon erects monuments to a soon-to-be extinct mode of communication.

The works are a meshing of mathematics and whimsy. The process is intensive, pushing repetition to examine nuance. In some cases, as in Plastic Parts, Solomon draws the same image hundreds and hundreds of times.

These replications of the US Plastic Man stamp are drawn and painted on 21 separate envelopes that are subsequently mailed and disseminated to reconvene at the gallery as a whole after a sometimes long journey though the intricacies and idiosyncrasies of the US postal system. Precise control and uncertainty play together, allowing for third party mark making (the stamps, stickers or marker lines added by the post office) and the possibility of works getting lost. Each part has its own journey.

Mailed Boxes is composed of 30 sent parcels that are then piled-up to replicate a life sized blue public mailbox. Other works distort scale to celebrate the physicality of the object. Greta With Two Navajo Earrings is an oversized envelope that stands as a teepee. Stamp of a Stamp is a four feet high functional rubber stamp.

In Jurors 1-12, Solomon turns 3 envelopes into 12 envelopes, a trompe-l'oeil that creates the illusion of envelopes piled on top of each other. Every detail down to the barcode is falsified. Security, and Security from Chase Bank are drawings that reveal the patterns of the insides of security envelopes, recalling minimalist drawings from the 70’s

In the single channel video Love Letter, a character played by the artist is seen walking through numerous frames, each frame wiping off the screen. On the way, he passes numerous mailboxes, a loose narrative about the indecision of a commitment to mail a letter

For his recent solo project booth at VOLTA NY 2008, curated by Amanda Coulson and Christian Viveros-Fauné, Ken Solomon set up an early voting bureau. He created his own stamps of 5 presidential candidates. The originals are small hand painted images of Barack Obama, Hillary Clinton, Mike Huckabee, John McCain, and Ralph Nader. He subsequently printed hundreds of sheets of stamps for the public to cast their vote. People at the fair placed a stamp of their choice on an envelope and dropped it into a clear ballot box. The results will be revealed at the Post Party opening on April 12th at the gallery.