The Great Game to Come

Following two historical projects from the 1960s and 1970s, one by the Danish artist Palle Nielsen, and the other by a group, the Frankfurter Kunstverein has transformed into a playground during one week in May. Children, adolescents and adults are invited to participate actively in the process of developing and experimenting. 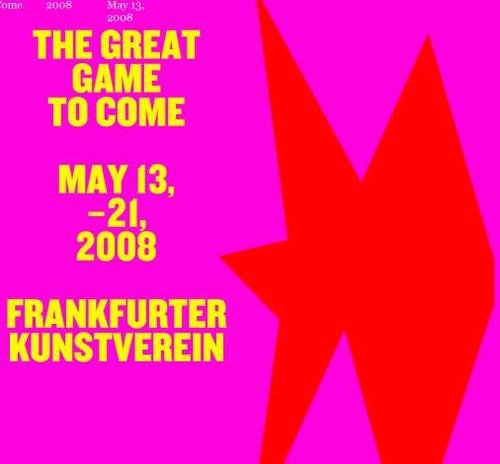 Following two historical projects from the 1960s and 1970s, one by the Danish artist Palle Nielsen, and the other by a group from the Hochschule für Gestaltung Offenbach around Thomas Bayrle, Wolfgang Schmidt and their students Linette Schönegge, Regina Henze and Karin Günther-Thoma, the Frankfurter Kunstverein will be transformed into a playground during one week in May. Children, adolescents and adults are invited to participate actively in the process of developing and experimenting. The idea, an initiative of Chus Martínez, Tobi Maier and Katja Schroeder, will be realized with the help of the artists Palle Nielsen, Thomas Bayrle and groups of students from Städelschule in Frankfurt and the art academy in Copenhagen supported by their professors Nils Norman (Copenhagen) and Tobias Rehberger (Frankfurt). This special project will extend over the entire exhibition space of the Frankfurter Kunstverein.

In October 1968 the Danish artist Palle Nielsen installed a huge adventure playground at the Moderna Museet in Stockholm, called The Model for a Qualitative Society. For three weeks the kids were the active subjects in the exhibition space and their free play epitomized freedom and creativity. The second project that serves as a reference took place on the grounds of the Frankfurt fair in. Similar to Nielsen’s adventure playground the group of students from the Hochschule für Gestaltung in Offenbach turned the main exhibition venue of the fairground in Frankfurt into a Kinderplanet, a planet for children. Both of these historical projects pose elemental questions: which kind of social space can art produce? How does a community of players, visitors and other citizens constitute itself? What space is available for community activities in contemporary society? With these questions in mind the Frankfurter Kunstverein will, during one week, turn into a huge playground and space for experimentation.

In addition to helping develop the playground for 'The Great Game to Come' the team of Umwelt-Exploratorium (UX e.V.) is going to be present during the week and offer workshops for students at the Kunstverein. Together they will develop a huge floating solar powered balloon. UX e.V. is a charitable association based in Frankfurt which was founded by former students from the product design department of Hochschule für Gestaltung Offenbach. Their aim is to work with current tendencies in our environment and to illustrate its transformations through collaborative projects.

During this project the Frankfurter Kunstverein will provide information about the „historical“ projects offering various sources of documentation. This project is a cooperation between the Frankfurter Kunstverein, Staatliche Hochschule für Bildende Künste - Städelschule, Frankfurt am Main, The Royal Danish Academy of Fine Arts, School of Visual Arts in Copenhagen and Umwelt- Exploratorium (UX e.V.). We would like to thank the Deutsche Bank, the PwCStiftung Jugend – Bildung – Kultur and Montana for the kind support of the project.