2-7 pm and by appointment

Drehort Zukunft. The artist analyses in a model-like setup visions and developments of the image of the city. Central references for her are the Soviet history and the Soviet cinema of the early 20th century, which depicted visions and utopias of a new city in accompaniment to the proclamation of a new society. 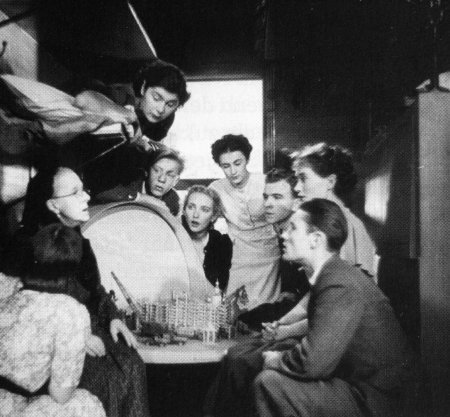 /Drehort Zukunft/ represents the second of a series of exhibitions on spatial concepts and contemporary architecture taking place at uqbar project space. In the current exhibition, the artist Romana Schmalisch (born in Berlin in 1974, lives and works in Berlin) analyses in a model-like setup visions and developments of the image of the city. Central references for her are the Soviet history and the Soviet cinema of the early 20th century, which depicted visions and utopias of a new city in accompaniment to the proclamation of a new society. In a complex montage of quotations and elements from historical movies, film properties and current city photographs and models, the artist investigates the medial representation of the city.

The reconstruction of a property from Alexander Medvedkin’s film /The New Moscow/ (/Novaya Moskva/, 1938) takes a central place in the exhibition: a projection table oscillating between a city model, a cinema and a plate camera. In the cited movie, an engineer travels from Siberia to Moscow to present by means of this mobile experimentation model his plans for the new city, a city he has never seen but always dreamt of. At first, he shows documentary shots of old buildings being demolished, whose place is then taken by the new city presented in drawings and models. The artist now uses this recreated object to project her film /Decision of the Party/ (2008), which combines Super8 material from today’s Volgograd with parts of the sound track from the Soviet propaganda film /The Promise /(/Kliatva/, 1946). In this movie, Joseph Stalin plans and realises “his” city, Stalingrad (now Volgograd). Thus, the real city of today is juxtaposed with its past medial vision, in turn becoming a projection of its own history within the film.

The concrete sculpture /Vorspann (Credits)/ is another reference to Soviet cinema. This model is a reduced reconstruction (1:20) of the pedestal for the steel sculpture /The Worker and the Peasant Woman/, which became a symbol of Soviet movie production, as it appeared – akin to Metro-Goldwyn-Meyer’s “roaring lion” – during the credits of all films by the Mosfilm company. The sculptress Vera Mukhina had originally created this sculpture for the Soviet Pavilion at the Paris World Fair in 1937. Afterwards, it stood at a central square in Moscow for a long time to eventually disappear in the archives some years ago, only leaving its vacant pedestal.

These two spatial objects are accompanied by two serigraphs showing further cinematographic images of the city as crystallisations of situations of social upheaval. /Arbeiterquartier/ (/Working-Class District/) and /Soazera/ use still images from Sergei Eisenstein’s movie Strike (Statshka, 1924) and Yakov Protazanov’s /Aelita/ (1924) respectively. /Drehort Zukunft /continues Romana Schmalisch’s work cycle /Reconstructing Futures/, in which she analyses social utopias and their ruptures in installations, films and performances. A first presentation of these works took place at the Wilhelm Lehmbruck Museum Duisburg, which acquired the installation /Future Cities/ (2007) for its collection.