Something Vague. The artist's work, which is characterized by a multitude of formal means and media, features a conceptual approach and a visual simplicity. His oeuvre mainly centres on the deconstruction and disclosures of narrative strategies. Besides video installations, sculptures and photographs, his artistic practical experience also includes talks, which are similar to performances or artist books that are published as scripts for TV series. 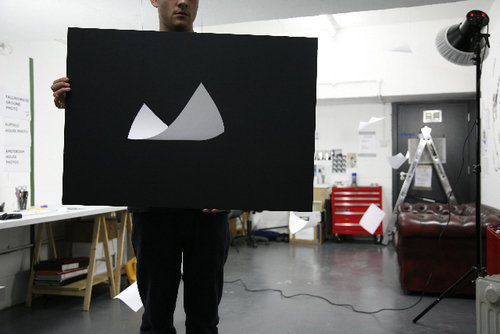 With the exhibition «Something Vague» by Ryan Gander (*1976), the Kunst Halle Sankt Gallen is introducing a representative of the young British art scene. His work, which is characterized by a multitude of formal means and media, features a conceptual approach and a visual simplicity. In the exhibition rooms of the Kunst Halle Sankt Gallen, the artist will present his first big solo exhibition in Switzerland, which shall offer the audience an in-depth insight into his current work and demonstrate his themes and artistic approach.

The mind games between true and fictitious stories are the central theme that leads through this year’s programme of the Kunst Halle Sankt Gallen. Ryan Gander's oeuvre mainly centres on the deconstruction and disclosures of narrative strategies. Besides video installations, sculptures and photographs, his artistic practical experience also includes talks, which are similar to performances or artist books that are published as scripts for TV series. Despite this heterogeneity, Gander's artistic works focus on the question about the role of the form. It is in fact finally always the form that, as a final appearance of the contents, represents the basis of the producer and the recipients' cognitive, creative and sensory processes.

Ryan Gander has developed a special exhibition display for the Kunst Halle Sankt Gallen. The two video installations «The Last Work» (2007) and «The Last Work Too» (2008) are not only built symmetrically in terms of space, but also closely interact in terms of their contents. The interior space of the project room is dominated by an electrifying shade of blue that reminds one of the video-technological procedures of a blue box. Here two films displaying the artist's way to work can be seen: One film documents the way from his home into his studio whilst the other one shows the route from his studio back to his home. The artist's walks on the streets of London are accompanied by an off-voice recorded on the audio track. It comments on artistic processes and formal reciprocations between the city as a source of inspiration and the piece of art that is currently being produced. This way, Gander manages in an intelligent manner to create a short circuit between diverging space and time zones. The creation of the work and its observation are only joined by the audience. The course created by Ryan Gander even leads into an exterior room, so that the spatial dimension of the Kunst Halle and its influence on the development of the exhibition dramaturgy is being referred to and defined in another way. Only via the backyard of the Kunst Halle, where the sculpture - homage to Le Corbusier – «Milestone» (2006/2008) can be seen, the visitors can access the last room. It is dominated by works that distinguish themselves through their minimalism and transparency. They surprise with the idea of absence, which quickly turns out to be a deliberate delusion. Thus, «Making it up as he went along (Alchemy Box 7)» (2008) incites the observer’s fantasy: Indeed the white socket is a capsule filled with objects, whilst an inventory pinned on the wall reveals the contents of the socket. Furthermore, a whole wall turns into a site-specific installation, as an entire story will be hidden away forever behind the recently plastered space. Thus the artist does not only stimulate the observer's curiosity (being the basis of the contemporary art audience), but also picks out as a central theme the His-Story of the institution by applying a new layer («She walked ahead, leading him through a blizzard of characters», 2008). Gander’s exhibition is a multifarious field of exploration that challenges the visitor through his deliberately conceptual approach. Gander questions narrative structures and cognitive processes, which leads to a search for and finally the determination of meanings. He therefore broaches the issue of the basic need for stories. Yet he also focuses on the difficulties of the creation of stories and the interpretation of the same with a last analysis. Ryan Gander was born in Chester in 1976. He lives and works in London and Amsterdam. He studied at the Manchester Metropolitan University before he continued his studies at the Jan Van Eyck Academie in Maastricht (1999-2000) and at the Rijksakademie in Amsterdam (2001-2002). His works have been displayed amongst others in: South Gallery, London in 2008; ikon gallery, Birmingham in 2008; CCW Wattis Institute, San Francisco in 2007; Stedelijk Museum, Amsterdam in 2007; MUMOK, Vienna in 2006; Tate Britain, London in 2006. In Switzerland, Gander made himself a name when he received the Baloise Art Award for his audio/video installation «Is this guilt in you too - (Study of a car in a field)» (2005) at Art Basel 36 in Basel.

The exhibition «Something Vague» will be displayed in a slightly modified form at Bonner Kunstverein (Bonn Artistic Association) from August 30th until November 2nd, 2008. Opening: Friday, August 29th 2008.

Events:
NEW! Guided tours in German:
Staff of the Kunst Halle Sankt Gallen will guide through the current exhibition. No reservation necessary.