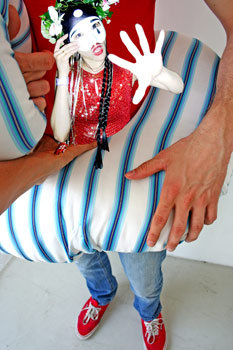 Dance witches Dance plunges the public and sculptures in Het Domein into a trance and sets them dancing. This is the first time that Lara Schnitger (1969, Haarlem) has worked in close collaboration with performance group My Barbarian. The group, and Schnitger, are based in Los Angeles. In an installation, a film and texts, the characters in the songs literally acquire a physical presence and Schnitger's sculptures evolve their own quirky personalities. In a frantic Faustian interaction, boundaries between real and unreal, creator and creation, public and actor, gay and straight, touch and smell, vanish.

Schnitger has figured in numerous performances by My Barbarian. In Gods of Canada, she designed the costumes and flags and, in Voyage of the White Widow, played a Dutch bird. In Dance witches Dance populated by a cast of mainly female characters, the disparate facets and personas are highlighted; and sexuality is a central theme. With their ornamental, erotic or clownish fabric designs, Schnitger's canvas sculptures are provocative and playful. The charged physical presence is underlined by expressive titles like Fun Bags, Beijing Bitch or Flasher. In each work, a fabric skin is stretched over an asymmetrical, weirdly shaped, almost shapeless wooden frame. Skin is an important theme: what lurks below and what above and, by extension, identity, social engagement and femininity. Schnitger translates these themes into powerful physical statements in the form of collaged patterns, texts and photos.

A catalogue with documentation on the collaboration between the artist and My Barbarian, accompanies the exhibition.

The T-time with Lara Schnitger is on Sunday 31 August at 12.30 and deals with performance art as a fusion of theatre, music and visual art. But watch out for guerrilla theatricals and activist artists.

At the same time you can visit in the ProjectRoom of the museum the exhibition of Serge Onnen: Champagne Scissors Holes, drawings, installations, animations. ( til oktober 19 )