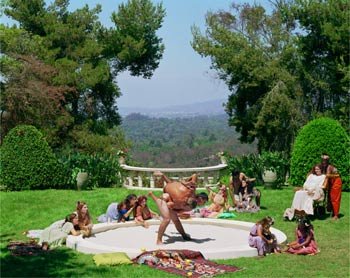 The San Diego Museum of Art has organized a solo exhibition of the celebrated artist Eleanor Antin, known for her works at the intersection of photography and performance. The exhibition is the first to focus on Antin's recent series of large-scale tableaux photographs based on Greek and Roman history and mythology, which are presented together for the first time. Eleanor Antin: Historical Takes is on view from July 19 through November 2, 2008.

Organized by Betti-Sue Hertz, SDMA's curator of contemporary art, the exhibition features more than 50 works, including large-scale photographs from Antin's three new series, Roman Allegories, Last Days of Pompeii, and Helen's Odyssey. The staged photographs are witty and psychologically complex melodramatic enactments of mythological and fictional classical narratives. The artist's friends and models pose in elaborately staged settings shot in various locations throughout San Diego (including SDMA's a classically transformed James S. Copley Auditorium) that are suggestive of sites from the ancient world.

"SDMA is proud to mount this particular exhibition of work by Eleanor Antin, an internationally renowned artist who has played an integral role in San Diego's sense of its own art history," says Derrick Cartwright, SDMA's executive director. "Contemporary art has a place among the important commitments that we undertake, and in Eleanor's case, fulfilling this commitment has been both a real pleasure and point of pride for SDMA."

In her new works, created from 2001 to 2008, Antin engages photography in a dialogue with nineteenth-century French and English salon painting, evident in the staging and backdrops of her photos that were inspired or transformed from the grand tradition of European history painting. The works are affectionate spoofs on classical culture with metaphorical parallels to the excesses of contemporary consumer economy. Antin's most recent photographs are presented along with a selection of works from three of her earlier quasi-historical projects from the 1970s and 1980s, The King (1974–1975), Angel of Mercy (1977), and Recollections of My Life with Diaghilev (1975–1978). Eleanor Antin: Historical Takes is accompanied by a catalogue, co-published with Prestel, featuring reproductions of works in the exhibition, essays by the exhibition's curator and art historian Amelia Jones, and photography historian Max Kozloff's interview with the artist.

Eleanor Antin was born in New York City in 1935. She is considered one of the most influential artists to emerge from the feminist art movement of the 1960s and 1970s and is also one of the most highly regarded women conceptual artists of the period. An influential performance artist, film and video maker, and photographer and installation artist, Antin delves into history as a way to explore the present. She recently received a Lifetime Achievement Award from the Woman's Caucus of the College Art Association, a Guggenheim Foundation Fellowship in 1997, and a Media Achievement Award from the National Foundation for Jewish Culture in 1998.

Antin is a widely exhibited artist with many solo and group shows both nationally and internationally, including a thirty-year retrospective at the Los Angeles County Museum of Art in 1999; Selections from the Angel of Mercy at the Whitney Museum of American Art, New York, in 1997; and 100 Boots, at the Museum of Modern Art, New York, in 1973. An exhibition of her series Helen's Odyssey was recently on view at the Ronald Feldman Gallery in New York. Antin lives and works in San Diego, California, and is an Emeritus Professor at the University of California, San Diego.

Image: A Hot Afternoon, from the The Last Days of Pompeii series, chromogenic print, 60 x 48 in., 2001. Courtesy of Ronald Feldman Fine Arts.