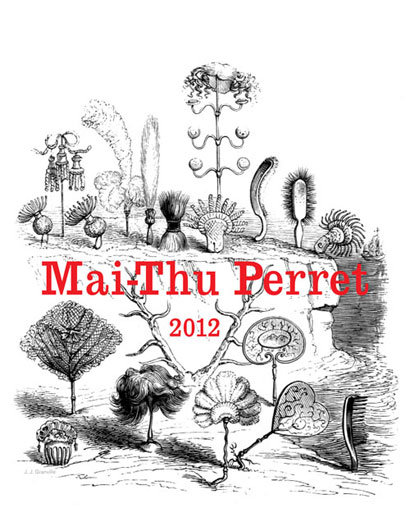 Timothy Taylor Gallery is proud to announce the first exhibition at the gallery by Swiss born artist Mai-Thu Perret, who has recently become well known internationally for her ambitious multi-disciplinary practice encompassing sculpture, painting, video and installation. Relating to modernism and its revolutionary potential, she has created a complex oeuvre that combines radical feminist politics with literary utopian texts and homemade crafts.

The title of the exhibition 2012, refers to the date of a change of era in the ‘long count’ Mayan calendar which started over 5000 years ago - an event that suggests to many the dawn of a new age. Perret likes to play with new age belief in mystical phenomena, manifested in her meta-narrative The Crystal Frontier, in which she imagines an all female, radically-minded community in retreat from capitalist society somewhere in the New Mexico desert. Initially in the form of diary entries and letters, The Crystal Frontier, which was started in 1999, spawned sculptures, paintings, handcrafted ceramics, performances, films, posters, mannequins, furniture and banners - often proposed as the diverse crafts output of the members of this fictional commune.

Perret’s exhibition at Timothy Taylor Gallery this September is dominated by a new series of glazed ceramic wall reliefs. Working on a much more ambitious scale than before, these new ceramics, all completed in 2008, are an extension of an earlier series begun in 2003. Earthy and tactile in nature, Perret explores the aesthetic language of the rustic baroque rather than the 20th century avant-garde: the repeating motifs have a timeless, symbolic quality: eggs, fountains, pyramids, masks and hair all appear in works that hover between figuration and abstraction, between the ancient world and the avowedly contemporary. Perret is fascinated by the dualistic nature of ceramics – the original clay is organic and pliable, its surface leaving the traces of marks like fossils found in rock, but, through firing, becomes entirely different - unyielding, fragile and vitrified.

Born in Geneva in 1976 and educated at Cambridge University, Perret has solo exhibitions forthcoming at both San Francisco Museum of Modern Art in November 2008 and Aspen Art Museum in February 2009. In addition to several current group exhibitions Perret’s recent solo exhibitions have included: An Evening of the Book and Other Stories at The Kitchen in New York, 2008, The Crystal Frontier at Kunsthalle Sankt Gallen, Switzerland, 2008 and Maastricht’s Bonnefanten Museum, 2007. In 2006 she was also the subject of a major solo exhibition at The Renaissance Society, University of Chicago, and in 2005 at the Centre d’art contemporain, Geneva. In 2007 she participated in the Lyon Biennale and in Eurocentric at the Rubell Family Collection in Miami.