Nina Beier and Marie Lund. Their work takes its starting point from the inherent story of their material, be it a social context or object, and typically derives from an interest in a given structure or system of representation. 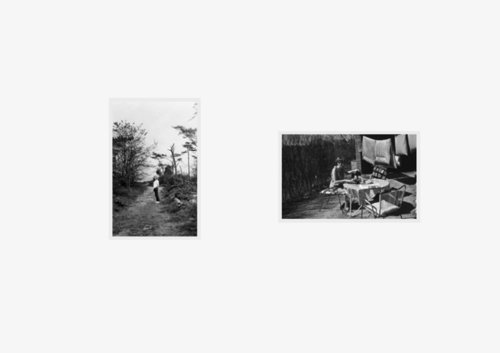 Laura Bartlett Gallery is pleased to announce Two Women, the first solo exhibition with the gallery by Nina Beier and Marie Lund.

Nina Beier and Marie Lund, who have been working collaboratively since 2003, share an interest in collective history on both a personal and societal scale. Their work takes its starting point from the inherent story of their material, be it a social context or object, and typically derives from an interest in a given structure or system of representation. Their work is characterized by its attention to the formal qualities of early 1970's performance, video and sculptural practices, in particular the simple sets of instructions for participants to follow. Nina Beier and Marie Lund are interested in the idealistic pursuit of collectivism as a means for not only pointing out commonalities but also anomalies in the practice of moving towards a potentially common goal. Their recent work, Clap in Time, for example, saw the visitors at Tate Modern, contributing to or baffled by an applause instigated by themselves and employees of the museum.

Although much of their work revels in the ephemeral or incidental, Beier and Lund’s interest in narrative and the performative often leads to work that is object based. The House and the Backdoor (2007), for example, is a carefully constructed wooden container enclosing a small collection of books. When Nina Beier’s mother moved in with her husband in 1972, those were the duplicates that overlapped between their two collections, and Nina’s mother reasoned to store her copies in the attic. The House and the Backdoor, makes tangible the experience of safeguarding individual identity in a relationship. Their content, and the sealing of them as a finite ‘unit’ galvanizes the books relative blandness as objects, and the emotional distance they convey charges them with symbolic value.

This exhibition will include three new works.

The Collection (2008) is an installation formed from the artists selection of objects from the belongings of a ‘68 year-old man who lives alone’, which are wedged into the gallery space (1.3 to 3 meters in width). Leaving a gap in their owners’ lifelong accumulation of objects - amongst them canes, walking sticks, pruners, and fishing poles – Beier and Lund momentarily offer up these tools to support the gallery architecture. The work suggests a kind of transferal or translation of the object from one narrative to another, uniting them in an alternative common endeavor. The objects’ precarious positioning in the gallery mirrors the status of their absence for their owner.

Two Women (2008) is a set of two photographs depicting each of the artists’ father’s previous wives both taken in the summer of 1969. Found and re-printed by the artists, these images represent the potential of alternative personal histories and explore the relationship between the artists and their material.

Downstairs is the new sound work, The Self to Other Ratio (2008). Similar to recent works, such as An Encore at the ICA, in which the artists invite professional performers to perform within a format that misplaces one element within their well-defined system of presentation. Here, Beier and Lund explore further their fascination with the dynamics of the group and the mark of the individual. The ‘Self-to-Other Ratio’ is a term that was developed from the discovery that when a group of singers sing in synchronization, the reference sound of the rest of the choir can occasionally overpower the airborne feedback received from one's own voice, which can then result in over-singing or poor intonation. In this new sound work, Nina Beier & Marie Lund have invited four soprano soloist to perform the same song at the same time, from Rossini’s Barber of Seville. The soloists have been instructed to perform as if alone on stage, and as the aria progresses, the four voices begin to break into disharmony and a sense of competition and tension arises.

This exhibition is kindly supported by the Danish Arts Agency.