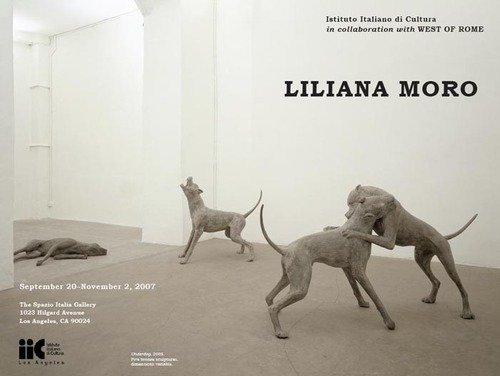 Organized by West of Rome and The Italian Cultural Institute

Moro works with a variety of media, including drawing, sculpture, sound, video and performance, that shape a multi-faceted world sourced from ordinary materials and everyday objects. A cat is a cat is a cat is a cat...consists of embroideries made with lamé threads (made of woven fabric and metal), and in doing so combines a soft, ornamental technique with a hard material. Conversely, for Underdog she uses a classical monumental material—bronze—to express the idea of strength. Through this formal balance between fragility and strength, her work unmasks aesthetic and social assumptions.

In addition, the exhibition will include Eau (2003), a collection of water sounds (fountains, streams, rivers and seas) recently included in the Collection Graziella Lonardi Buontempo and featured at Villa Medici, Rome. Eau is highlighted in Los Angeles for the VII Annual Italian Language Week (October 22 – 28, 2007), themed “The Italian Language and the Sea.”

About the Artist
Liliana Moro (b. 1961, Milan) is one of the most representative Italian artists of her generation. She is the co-founder of the artist space Spazio di via Lazzaro Palazzi, which was active in the early ‘90s in Milan. She studied at the Brera Academy of Fine Arts with Luciano Fabro, a seminal artist of the Italian movement Arte Povera. Moro has taken part in important international public exhibitions, including Documenta IX, Kassel, 1992; Aperto ’93, XLV Venice Biennial, 1993; “Wounds. Between Democracy and Redemption in Contemporary Art,” Moderna Museet, Stockholm, 1998; “Minimalia,” P.S.1, New York, 1999; I Valencia Biennial, 2001; “Les Enfants Terribles,” 1909-2004, Museo Cantonale, Lugano, 2004; “Monuments for the USA,” CCA Wattis Institute for Contemporary Arts, San Francisco, 2005.
Her works are included in important public and private collections, such as: Castello di Rivoli, Italy; Museo Pecci, Prato, Italy; FNAC, Paris; FRAC, Orléans, France; FRAC Rhône- Alpes/Nouveau Musée, Villeurbanne, Lyon; MUHKA, Antwerp, Belgium; Galleria d’Arte Moderna, Torino; Centro per le Arti Contemporanee, Rome.
The monograph “Liliana Moro. La fidanzata di Zorro” was published by Skira on the occasion of the survey held in 2004 at the Fondazione Ambrosetti, Palazzolo s/O, Brescia.

About West of Rome
West of Rome is an extensive project initiated in 2005 by Emi Fontana in Los Angeles. It consists of a series of contemporary art shows and events that activate the relationship between the audience and the city. The dynamic nature of the sites, which exist according to conditions specified by invited artists, reinforces the collective experience often lost at traditional venues. Past projects have included Olafur Eliasson’s Meant to be lived in (Today I’m feeling prismatic (2005), Monica Bonvicini’s Not for you (2006), and relay (2007) by T. Kelly Mason and Diana Thater.
http://www.westofromeinc.com

About The Italian Cultural Institute of Los Angeles
The Italian Cultural Institute in Los Angeles, directed by Francesca Valente, is one of five government cultural agencies established in the United States by the Italian Ministry of Foreign Affairs. Founded in 1984, the Institute acts as a cultural intermediary between Italy and the U.S., in a multifaceted perspective. ICI is a center for cultural and academic activities, a school of Italian language and culture, and a center for art exhibitions, film screenings and videos. The Spazio Italia is the gallery at the Institute, housing art, photography, architecture and design exhibitions.