Video as Video, Rewind to Form 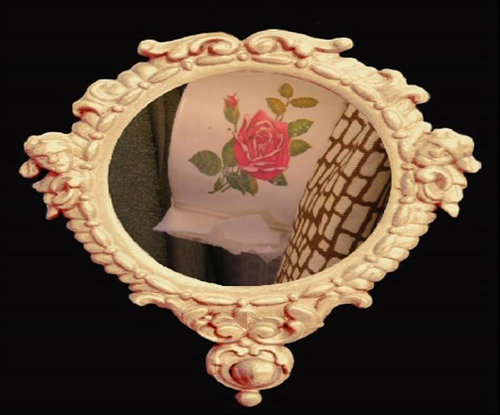 ROB CARTER's video Reseed takes place at the Wimbledon tennis courts as they transform from a constructed sports stadium into a garden lush with gurgling plants. Collapsing nine weeks of a horticultural time-lapse filming into nine minutes, Carter integrates illusion into a space generally associated with real-life sporting events. Recent solo exhibition-Landscaping at Galería Fruella in Madrid, Spain; recent group exhibits include Paper City at Mixed Greens in New York and This Modern World at General Electric in Fairfield, Connecticut.

ROCHELLE FEINSTEIN's vintage televisions with painted-on disco balls evoke both nostalgia for the 1970s and a call to arms regarding rapidly evolving technology. As a random television channel ekes through with a static-laden transmission, viewers are reminded of the way that television is becoming less important as the Internet emerges. Feinstein recently exhibited solo shows at Momenta Art in Brooklyn, New York, and The Suburban, Chicago. She currently teaches in the painting department at Yale University.

JAMES GULLIVER HANCOCK emerged out of the Sydney, Australia, art scene, where he married the visual arts with music in his own gallery, SPACE3. His animated music video for the Australian band LENKA mixes a Brooklyn-esque indie aesthetic with heartfelt, emotionally driven sincerity. James works commercially and independently; recent clients include publishers Simon & Schuster and television networks MTV Australia, among others. He is based in Los Angeles.

ABHISHEK HAZRA uses video based "micro-narratives" to explore the intersections between technology and culture. In Codework, Hazra formulates hypothetical scenarios that can be read as an allegorical take on some of the programming fundamentals behind PHP, a scripting language widely deployed on the Internet, and also using these scenarios to reflect on the larger cognitive implications of viewing coding as a form of "meta-language," thus using it as a way to discuss ontologies of scripting languages. Recent groups shows include First Left, Second Right at Thomas Erben Gallery, New York. Hazra is represented by GALLERYSKE, Bangalore. He lives and works in Bangalore.

JULIE LEQUIN's move from Québec to Los Angeles-and her adventures speaking in the oft-times difficult to decipher Québec accent-inform her playful, yet somber, animated videos. Gossips, one of the shorts on her DVD from her published art book The Ice Skating Tree Opéra, tricks viewers: At once we believe we'll learn more about the fluffy, fun ramblings about life, but instead Lequin takes viewers into her own, more personal, life decisions.

MIOON's video documentation of Human Stream, a sculptural video installation that was on display at the Kunstmuseum Berlin in 2005, plays with the aforementioned multiple implied meanings. Two giant heads covered in feathers are positioned in an open gallery space. As neon lights merge over the sculptures, tiny humans scurry about, calling to mind the large-scale photography of Thomas Struth. Mioon, which is comprised of Min Kim and Moon Choi, have had recent solo exhibitions at Gana Forum Space in Seoul, Korea; Gallery Ruth Leuchter in Duesseldorf, Germany; and Gallery of CEAAC in Strasbourg, France.

JULIE ORSER's video Double Bind (Anna Moore) considers the archetypal feminine subjects of film noir and psychological melodrama. The titular character, Anna Moore, is both and neither, caught in a bind between the two genres. A series of events unfurl as the frames switch between the two genres, focusing on the stealth femme fatale of film noir and the docile housewife of the psychological melodrama. Orser's recent solo exhibitions include Anna Moore at Changing Role Gallery in Rome, Italy; Anna Moore at Paul Kopeikin Gallery in Los Angeles; and Anna Moore at Philip Feldman Gallery in Portland, Oregon.

LUANA PERILLI's sculptural video piece W Titina deals with memory, language and storytelling through images. Suggesting mergence of the mirror image with video, Perilli projects separate images of her Italian grandmother and the interior of her grandmother's home inside decorative ceramic frames one would likely find inside an Italian home. Perilli's recent solo exhibitions include Tattile Duttile, V.M.21 artecontemporanea in Rome and Why? at The Gallery Apart presso Fondazione Pastificio Cerere, Rome. She is represented by the Gallery Apart in Rome, Italy.

TARAS POLATAIKO's work probes cultural identities, time and memory. Born in Chernivtsi, Ukraine, Polataiko draws on his own cultural roots for his video "Kyiv Classical." Using straightforward, documentary-style of shooting, the artist responds to the near elimination of cultural memory as it occurred in Ukraine when Russian Czar Alexander II signed a secret edict that banned the use of the Ukrainian language. Recent exhibitions include Point of Origin at Artspace in Sydney, Australia. Forthcoming shows include solo exhibitions at Priska C. Juschka Fine Art in New York and Galerie U7 in Frankfurt, Germany (forthcoming 2009). Polataiko is represented by Priska C. Juschka Fine Art in New York.