The French artist established himself in the 1990's with his exploration of the relationships between art, spectacle, media and economy using a variety of media, from TV and video to installation and public interventions. For the exhibition "Artists' biopic cinema" he questions how the artist has been represented in Hollywood and in art house movies. By transforming all 6 gallery spaces into mini cinemas, Laurette presents the mythologised life of the artist by screening 18 specifically chosen feature films daily. 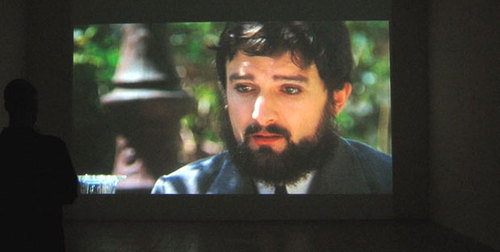 SPS presents a solo exhibition of new work by French artist Matthieu Laurette. Laurette established himself in the 1990’s with his exploration of the relationships between art, spectacle, media and economy using a variety of media, from TV and video to installation and public interventions.

For the exhibition ARTISTS’ BIOPIC CINEMA, Laurette questions how the artist has been represented in Hollywood and in art house movies with emphasis on the allegory of the artist as a temperamental genius, free from the constraints of society, a subject that continues to capture the imagination of Western culture. By transforming all 6 gallery spaces into mini cinemas, Laurette presents the mythologised life of the artist by screening 18 specifically chosen feature films daily.

The films offer an insight into the fictionalized lives of famous artists such as Andy Warhol, Rembrandt, Vincent van Gogh, Frida Kahlo, Francis Bacon and Salvador Dali to name but a few. Visitors are given an excellent opportunity to observe ways in which the film industry cultivates, feeds and perpetuates the myth of the artist-genius.

In conjunction with the exhibition, SPS organises a panel discussion on Sunday 14 December.

Amsterdam will celebrate museum night for the 9th year in a row. 41 Museums and institutions will open their doors and organise special events from 7pm until 2am! Join us at SPS for a jam packed programme that includes sound performances, film and a solo exhibition of new work by the French artist Matthieu Laurette
Saturday 1 November, 19.00 -02.00 hrs

During Museum Night 2008 the Dutch Film and Television Academy, in collaboration with SPS, will present a special film programme composed of recent works of second and third year students.The programme consists of the three fiction films Luxaflex, De Overkant, Altijd november and two documentaries Nachtwake and Woensdag, placentadag. The films will be screened in Cinema 1 from 19.00 onwards.
Please check our website for extensive programme details.

SPSOUND
Pierre Bastien | Soccer Committee and Machinefabriek
Saturday 1 November, 21.00 hrs
Location: Auditorium
Entrance: free
“The musicians of his orchestra are machines. And the idea behind it is simple, efficient and poetic : to have traditional instruments (Chinese lute, Morrocan bendir, Javanese saron, koto, violin, sanza, etc.) played by a mechanical instrument made of meccano pieces and recycled turntable motors. These hybrid and self-playing sound sculptures perform a series of short pieces, charming and hypnotic. "(Michel F. Côté)
In the recent years, Pierre Bastien and his machines collaborated with video artist Pierrick Sorin, fashion designer Issey Miyake, dj Low, British singer and composer Robert Wyatt and the Trottola circus. The most recent compositions were released on Lowlands and Rephlex.
http://www.pierrebastien.com

Rutger Zuydervelt has joined forces with Soccer Committee's Mariska Baars on a multitude of previous projects but nothing has come close to the sheer force of their newest material. Baars' bare-bones songs of lament and longing are taken apart and reassembled by Zuydervelt's capable hands. Gentle acoustic guitar plucks and soothing harmonium tones work magically to highlight the brightest star on the album: Baars' fragile, beautiful voice. She is in magnificent form, pulling emotions from the depths.

Cinnaman
Dj/producer cinnaman started dj-ing at the very young age of 12. After starting with hip hop, he bumped into Aardvarck, who showed him around Amsterdam and it’s carnival madness. He started producing music and is on of the linch-pins of Beat Dimensions, now making it’s mark on the Amsterdam urban beat and dubstep scene.

1.1
She loves everything about radio and got most of her considerable musical science from it. She’s the coordinator of Samurai.fm / Amsterdam. She produces the Faces Radio Show on samurai.fm.

Juha
One of Amsterdam’s foremost proponents of experimental music and initiator of Viral Radio. He is an avid curator, blogger, and radio presenter. Sonic Warfare, Bimhuis, Audiculture.org are current projects of his that that inform his sound in elecronica, sound art, dub and experimental beatplay in this special performance.