A survey of works by members of the Zero group created between the late 1950s and late 1960s. The exhibition concentrates on the movement's artistic output between 1957 and 1966 and examines the unusually collaborative relationship that developed between groups of artists in Germany, Holland, France, Italy, Belgium, and Switzerland in the late 1950s and early 1960s. 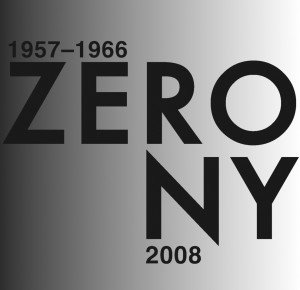 Sperone Westwater is pleased to present, for the first time in the United States, a survey of works by members of the Zero group created between the late 1950s and late 1960s. Inspired by the recent survey “ZERO: Internationale Kunstler-Avantgarde der 50er/60er Jahre,” which opened at the Museum Kunst Palast in Düsseldorf and traveled to the Musée d’Art Moderne in Saint Etienne (2006-2007), “ZERO in New York” has been assembled with the support and collaboration of most Zero artists and their respective foundations. The exhibition has been organized by David Leiber, Director of Sperone Westwater and Mattijs Visser, Founding Director of the Zero Foundation.

The Zero movement was initiated in the late 1950s by two Düsseldorf-based artists, Heinz Mack and Otto Piene. The term “Zero,” which the artists coined to describe their concept, later came to define an international movement taken up by artists across Europe. “ZERO in New York” concentrates on the movement’s artistic output between 1957 and 1966 and examines the unusually collaborative relationship that developed between groups of artists in Germany, Holland, France, Italy, Belgium, and Switzerland in the late 1950s and early 1960s.

Reacting to the personally-charged expressionism of the Post-War period, Zero artists aimed to banish any trace of a personal style and instead bring elements of the non-art world into their work. Informed by new materials and technologies, and incorporating elements of light, fire, and water, Zero was characterized by an idealistic spirit of collaboration in pursuit of new concepts of light, movement, and energy. Working in an environment without galleries and contemporary art spaces, these artists came together to exhibit their work in a series of one-day-only evening exhibitions, often staged in their studios. Manifestos were often published in association with the shows, such as “Zero 1” (1958), “Zero 2” (1958), and “Zero 3” (1961). These included texts in multiple languages written by artists and curators active in the Zero circle who sought to define what they termed “The New Artistic Conception.” With its serial presentation, vibrant light structures and strong theoretical component, Zero was a progressive art movement that revolutionized Post-War art and led to the formation of the Post-War Avant-Garde. In describing the meaning and significance of the name “Zero,” Otto Piene wrote:

“From the beginning we looked upon the term [Zero] not as an expression of nihilism – or as a dada-like gag, but as a word indicating a zone of silence and of pure possibilities for a new beginning as the count-down when rockets take off – ZERO is the incommensurable zone in which the old state turns into the new.” - Otto Piene, “The Development of the Group ‘Zero’”, "Times Literary Supplement" (London), 3 September 1964

From the original German Zero group, works by Heinz Mack, Otto Piene and Gunther Uecker will be shown in “ZERO in New York.” Of particular note will be three important light sculptures by Piene that were made for his first New York exhibition in 1965. Also on view will be works by other German practitioners, including Gerhard von Graevenitz, and Adolf Luther, works by a Dutch group of artists, Henk Peeters, Jan Schoonhoven, Armando and Jan Henderikse, who cam together in 1960 under the name “Nul”, in addition to work by another Dutch artist Herman de Vries. Works by Italian artists Lucio Fontana, Piero Manzoni, Enrico Castellani and Nanda Vigo will be shown, along with Belgian artist Jef Verheyen. From France, works by Arman and Francois Morellet, along with fire paintings and monochromes by Yves Klein, will be exhibited, and from Switzerland, work by Daniel Spoerri, Christian Megert and a kinetic sculpture by Jean Tinguely will be included.

A 320-page fully-illustrated catalogue will be published by MER Paper Kunsthalle on the occasion of this exhibition. Edited by Mattijs Visser, it will include essays by Catherine Millet, Editor of Art Press; Dr. Valerie Hillings, Assistant Curator at the Solomon R. Guggenheim Museum; and texts by Otto Piene, Heinz Mack and Yves Klein. "ZERO in New York" will be the first in-depth English publication dedicated to the Zero period and its artists.