It is not about YOU, It is about THEM

On Frozen Time and Differing Spaces. 4 European artists have been commissioned to create productions in situ throughout the following 12 months. Adina Popescu has invited Roth Stauffenberg, Jonas Dahlberg, Micol Assa'l and Tris Vonna-Michell to work at Nyehauso gallery and former Library at The National Arts Club in Gramercy Park. The project leads toward the total transformation of the space into "The House". 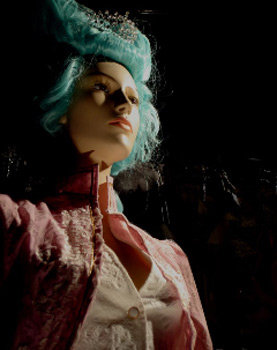 Mark Z. Danielewski's book House of Leaves begins with the measuring of a house that ends up being larger in the inside than on the outside. As often as its inhabitants re-measure it, it always remains the same. From Sebastian Brant's Ship of Fools to Jorge Luis Borges' The Library of Babel; from Douglas Cooper's Amnesia to Piranesi's endless corridors and hallways Ð the fantasy of the secluded, total inner-space gives birth to a world, very similar to the one we know but yet significantly different: As if seen upside down through a camera obscura.

Four of the most interesting artists in Europe have been commissioned to create productions in situ throughout the following twelve months. Adina Popescu has invited the artists RothStauffenberg, Jonas Dahlberg, Micol Assa'l and Tris Vonna-Michell to work on productions in situ at Nyehauso gallery and former Library at The National Arts Club in Gramercy Park. This project leads toward the total transformation of the space into THE HOUSE.

The consecutive four productions constitute the notion of an endlessly reformulated place, here in known as THE HOUSE. The artists are all involved in the mission of re-interpreting our understanding of material: including the architecture of the given space and its components. By doing this, the mere process of production is brought to the center of attention again.

"A Ship is the ultimate Heterotopia", comments Foucault on the notion of "les-contre-espaces" (counter-spaces). He considered these as being specific types of spaces that relate to any other space within a given culture by inversing, suspending or neutralizing their predominant conditions. In contrast to Utopias, which are non-existent hypothetical spaces, Heterotopias as real spaces within society. We like to think of Art as this counter space, a Heterotopia in which the notion of what could be possible can be extended and realized within the actual material -ad infinitum.
- Adina Popescu

Adina Popescu is a writer born in Romania and living between New York and Berlin. She is a contributor to Artforum, and has been included in several books with her plays and theoretical essays. She has lectured at the Sculpture Center NY and the Wissenschafts Akademie Berlin, among other institutions. She has curated an "Intervention" at the 2007 Moscow Biennale, has ÔcuratedÕ a radio show on sound pieces with W PS1 Radio at 2007 Venice Biennale amongst several shows at galleries, world wide. At the moment she is working on her PHD on 'dysfunktional architecture' and postcommunist urban structures.

Nyehaus is an exhibition space founded by devoted contemporary art collector and curator Tim Nye.
In addition, Nyehaus commissions new works in order to expand and enliven the dialogue within an artist's oeuvre.
Located in the National Arts Club, 15 Gramercy Park South, 8D, Nyehaus is open by appointment from Tuesday through Saturday.