The exhibition deals with the negative feelings of love. Break ups, pain, sorrow, anger, violence and parting is thematically woven through the exhibited works. When love ends emptiness and grief remains - but at the same time occurs that requisite reflection upon oneself, with the hope for a new beginning. 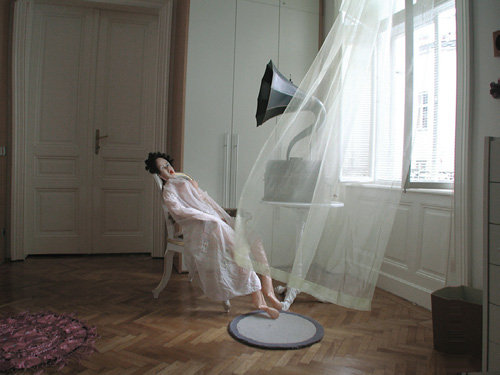 This year’s focal point deals with the one of the existential aspects or our lives: LOVE.
In three exhibitions LOVE I – Searching, LOVE II – Being, and LOVE III – Collapsing spans the gamut around a difficult, delicate and emotional topic.

The third exhibition in this series LOVE III – Collapsing deals with the negative feelings of love.
Break ups, pain, sorrow, anger, violence and parting is thematically woven through the exhibited works.
When love ends emptiness and grief remains - but at the same time occurs that requisite reflection upon oneself, with the hope for a new beginning.

In a succession of 7 short clips Renate Bertlmann in her photo film Top U29 –one day long covers the events of one day in the daily life of a couple in their home. The borders between the interior and exterior world, between fantasy and reality blur - it begins a 24-hour journey through the realm of hopes, emotions, memories and fears. Dolls become symbolic characters for the experienced elements of a relationship, for speechless moments of distance, for limitation and loss of personality.

Eva Brunner Szabos large format photos Archeologia form a space for remembrance and develop archaeology of the pictures, of the time from ones life. In the style of the film „Viaggo in Italia“ from Roberto Rossellini and the mythological infused excavation scenes from Pompeii visualizes transience, loss and emotional processing. Szabos photographs show the physical moments of the attentiveness of a couple overlaid, by means of long-term exposure, with crime scene outlines. With these fragile emotional layers she creates imagery, which allows us to submerge into universal stories and feelings.

James Higginsons expressive photo series shed light on aggression and brutality in a relationship, as well as in families. He uncovers the dramas of derailing emotions, from love to a prison that becomes torture - which are so often hidden behind a façade of relative normality. In The Story of Ruth, Higginson draws the story of abuse, of explosive, violent outbreaks against the partner. In the series Rage he uses a suburban setting as metaphor for the sentence „To rip someones heart out with words.“

The film locations of the video work by Nicholas & Sheila Pye are usually isolated mysterious spaces and resemble theatrical dream worlds. In these places couples meet, loving pairs or brothers and sisters and go through stages of emotional and physical dependence, which are riddled with increasing amounts of tension and distrust. The hostile wordless togetherness leads to rising frustration and disconcertion - up to the detonation of the love. The video trilogy Loudly, Death Unties, A LIFE of ERRORS and The Paper Wall captivates with a strong surreal component of the imaginary and clarifies with simultaneous accuracy the symbiosis of the with and against each other.

Linda Reif depicts the internal pain, the emotional cooling off after traumatic aggressive injuries, as well as the victim who brought on the event, who would like to undo its happening but will fail. Reif titles the work with: Nachdem mir mein Exfreund ins Gesicht geschlagen hat (After My Ex-friend Struck Me in the Face) and gradually the scratches negative, on which her face and her humiliation are exposed.

In Katarina Schmidls video muse au chocolat a chocolate casting of her own body (in well-known lying Venus position) dissolves in front of an audience with the heat generated by a bright searchlight beam. She thematically brings up the question of an ideal condition, an ideal of beauty, and questions our social value system where the natural aging process is often granted no place and therefore connected to the loss of love, eroticism and desire.

Martin Scholz-Jakszus leads former pairs in his series EX together again to lingering closeness to seek out connecting signals. The titles of the works scrutinize how long the couples were together and how long they have been separated. Are there still hidden intimacies, unresolved feelings, does the body language tend toward aggression and refusal or towards each other and confidence? Martin Scholz questions the handling of partnership’s common ground after everyone has gone his or her own way.

Basia Sokolowskas photo series Untold Narratives tells of terminating a love, of leaving a familiar place where one experienced love. Subtly and directly, circles the camera touching for the last time fragments of the place that carries in itself the joint traces of living together. Everyday objects become witnesses of mute mourning, isolation and uncertainty, which coincide with the breakup of a relationship. A quiet parting, a mutual collection of memory fragments, a departure.