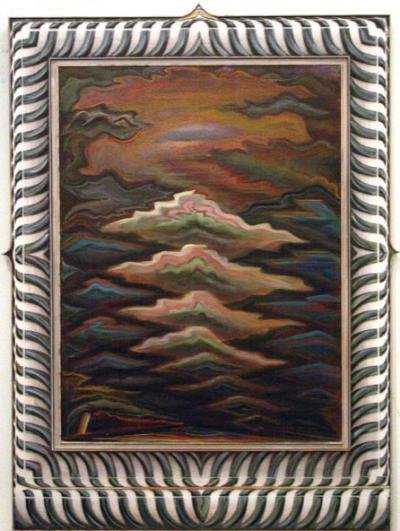 Harris's work draws from a wide and seemingly contradictory range of influences and affinities and embody strategies from an array of historical periods: Medieval talismanic utility, Modernist structure, Romantic pictorial drama, and Post-modern eclecticism. In the work, Buddhist iconography forms skewed harmonies with late French Impressionism. Echoes of artists like Paul Cezanne, Jospeh Cornell and Al Held seem to animate the foundations of Harris's process. Perhaps Cezanne's oft-quoted appreciation of Nicolas Poussin can serve as an unofficial credo for the work's motivating factor, to put "order in the grass and tears in the sky."

Aside from the diversity of their references, Harris's paintings also seem to reconcile contrasting approaches to object-making: the focus of each piece oscillates between the intensity of the painted image and the intricately crafted sensibility of the surrounding relief. Built from delicately cut and sculpted wood, the reliefs focus the viewer's attention, creating a world in which the image resonates. To create the images Harris works from both meditative intuition and a rigorous sense of technique and art historical awareness. Formal logic is pursued with hallucinatory, ecstatic rendering, with the aim of achieving and/or inventing a sense of integration, resonance, and harmony.

To this end, each work represents a long process of calibration between painting and relief. The elements are often begun independently and enter into conversation with one another as Harris develops the concept for the total piece. In this way each painting is given a unique setting; or seen conversely, each relief is eventually given an emblem, a symbolic pictorial experience that defines and specifies its ambient characteristics. In some cases Harris employs illusionistic effects to further blur boundaries between these two aspects of the work.

For the artist, this calibration is not only a material evolution; it is also the exploration of poetic, metaphysical, and even mystical terrain, an effort to imbue surface and pigment with sentience and to create transparency and transportation where opacity previously reined.

Zach Harris received his BA from Bard College and his MFA from Hunter College. He was recently included in Implant, an exhibition at the UBS Gallery of Art organized by the The Horticultural Society of New York.