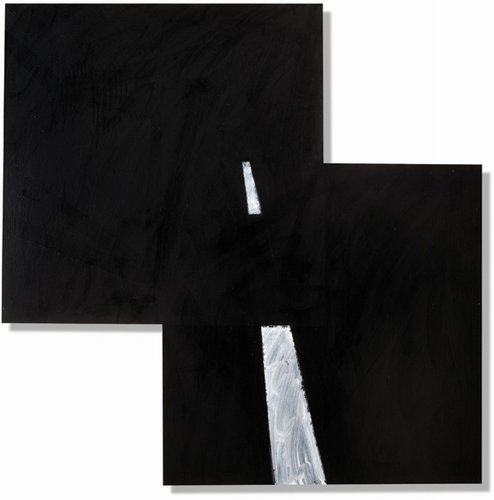 For her second solo exhibition at 303 Gallery, Mary Heilmann will present recent paintings as well as related pieces at 547 W. 21st Street, and a curated group show at 525 W. 22nd.
In both shows, Heilmann examines the nature of space. Giving equal importance to physical space, the way space is depicted through imagery, and the spaces that imagery itself can conjure psychologically, Heilmann is able to extend her unique view of the infinitely retraceable paths created by the world we inhabit. The canvas of “Two-Lane Blacktop” is shaped, making the wall and the adjacent space key elements in the physical presence of the work. Moving beyond the illusory image of a road, the viewer becomes physically engaged with the painting. The forms in the painting itself implicate other spaces, not only physical, but mental and emotional as well.

The diptych “Truckstop Trip (Lost Hills – Blackwell’s Corner)” operates in a similar manner, with the hallucinatory technicolor imagery of one panel set off by the material space suggested by wood in the other. Heilmann is able to envision a space --semi-imagined, semi-real, and entirely dependent on seeing multiple perspectives simultaneously -- where an all-encompassing, almost holistic view determines a spatial reality.
This very particular perspective is the curatorial impulse behind “Mary’s Choice”, the group exhibition presented at 525 W. 22nd Street. The artists in “Mary’s Choice” are dealing with perspective in a broad sense – literally in animation camera work, and literately in point of view. They share an impulse to show the unseen. The iconic sculptures and large format Polaroids deal with known psychological tropes, referencing the traditions of surrealism, comic animation and the mythic imagery of ancient cultures.The artists included in the show are Paul Gabrielli, Paul Lee, Erik Moskowitz and Amanda Trager, Steve Keister, Jill Levine, Sarah McDougald Kohn, Xi Le, Craig Hein, Mark Magill, and Julie Ryan. The show also includes work from the Flying Saucer Project, a collaborative enterprise with Steve Keister and Rachel Bleiweiss-Sande.

“Mary Heilmann: To Be Someone”, a comprehensive retrospective of the artist’s work,organized by the Orange County Museum of Contemporary Art, is on view at the New Museum in New York until January 25. A fully illustrated catalogue was published in conjunction with this exhibition. Heilmann has had solo exhibitions at the Secession, Vienna; Camden Arts Centre, London; and the ICA Boston. Recently her work was included in the 2008 Whitney Biennial, “WACK! Art and the Feminist Revolution”, Los Angeles MoCA; and "High Times, Hard Times: NY Painting 1965-75.”