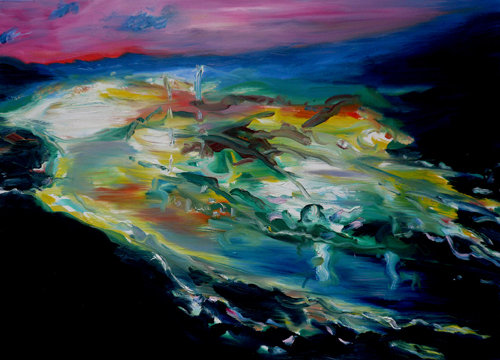 Things Fall Apart takes its title from a line in a well-known poem by William Butler Yeats1 that warns of ominous forces unleashed in the political vacuum following World War I. The poem reverberates in twentieth and twenty first century literature and culture, from Chinua Achebe’s eponymous novel2 about African societies giving way under colonialism, to Joan Didion’s collection of essays on California in the 1960s3, to Oliver Stone’s Nixon. Allusions to the poem regularly color news items, notably The Economist’s cover story after the U.S. market collapse, and New York Times articles covering the failed war in Iraq, the increasing dysfunction of the U.S. right wing political axis, and the spread of the current economic crisis to global markets.

If Yeats' poetic imagery and its subsequent iterations seethe with foreboding and even despair, by contrast, the international group of artists presented in Things Fall Apart mark precipitous global power shifts in their work while positing the darkest moments—when things fall apart—as salient points of departure for change.

The graphically political work of Mounir Fatmi (Morocco) directly addresses the constructed political hierarchies at hand: flags of each of the G8 nations are poised like so many icons of power atop push-brooms, symbolizing the burden placed upon those who bear the brunt of the global decision-making system, and emphasizing its forced semblance of equilibrium. Global power dynamics and the intricate process of enemy construction are likewise made legible in the oil paintings of Yevgeniy Fiks (Russia), which point to a forgotten moment in U.S. history (1943-1944) when the goals of the American and Soviet propaganda machines coincided; the story turns poignantly on the ironic twist provided during the McCarthy hearings, when artists fulfilling that particular call to patriotism were rewarded by being blacklisted. Nationalist propaganda is again repurposed as so much raw material when Joy Garnett (USA) re-invents the candy-coated public relations photographs from the Yangtse Three Gorges Development Corporation website in a series of oil paintings that show the earth itself giving way in the widening gyre of China’s monumental and controversial public works project.

Plucked from televised footage of the earliest US bombardment of Iraq after 9/11, the drawings of Stephen Andrews (Canada) signal the coming of the Americans as “liberators” with a mixture of horror and humor, focusing on those instants, magnified by the media, when everything changes irrevocably. Paul Chan (USA/Hong Kong) and members of the New Orleans-based artist-run collective The Front4 present a selection of drawings, prints and photographs direct from the Ninth Ward, NOLA's ground zero. Displayed salon-style, these works combine images of destruction and displacement, personal memory and political disturbance, reflecting the people and places of the Gulf Coast in the aftermath of Hurricane Katrina.

In her new dual-channel video installation, Renata Poljak (Croatia) explores the intersections of the personal and the political, identity and nationalism, by juxtaposing the escalating collapse of a fictional relationship with the suppressed history and memory of the war between Serbia and Croatia. Susan Silas (USA/Hungary) inverts memories of past barbarism through a haunting retrospective lens with her series of paired photographs that reunite images from the Olympic Stadium in what was once West Berlin, with images from the Jewish Cemetery at Weißensee, in what used to be East Berlin. The layered, transparent drawings of multimedia artist Susan Hefuna (Egypt/Germany) play on metaphors of separateness and stereotypes of otherness through the filter of her dual heritage; multiple vantage points and interpretations—from the Modernist grid to Orientalist mystification—infuse her abstract renderings of mashrabiya screens, a traditional Islamic latticework window element that allow a building’s inhabitants to observe the outside world while remaining hidden.

Carlos Motta’s (Colombia) stacked, mass-produced newspapers comprehensively list the history of U.S. global interventions in Latin America in print form, offering a bloody inventory of counterinsurgency, weapons use, psychological warfare, interrogation and environmental degradation; the broadsheet points to the production of alternative histories, and suggests both the potential power as well as possible limitations of distributing information freely to the public. In his latest series of oil paintings drawn from news items covering the implosion of derelict buildings across the country, Christopher Lowry Johnson (USA) zeros-in on our brute fascination with physical destruction, while suggesting a climactic end to the era of American global dominance. Brimming with the heartbreaking drama of a lost “Americana,” this work evokes a once powerful and alluring past now very much past its prime and facing the prospect of being torn down in order to start anew.

Turning and turning in the widening gyre,
The falcon cannot hear the falconer;
Things fall apart; the centre cannot hold;
Mere anarchy is loosed upon the world,
The blood-dimmed tide is loosed, and everywhere
The ceremony of innocence is drowned;
The best lack all conviction, while the worst
Are full of passionate intensity.

Surely some revelation is at hand;
Surely the Second Coming is at hand.
The Second Coming! Hardlyare those words out
When a vast image out of Spiritus Mundi
Troubles my sight: somewhere in sands of the desert
A shape with lion body and the head of a man,
A gaze blank and pitiless as the sun,
Is moving its slow thighs, while all about it
Reel shadows of the indignant desert birds.
The darkness drops again; but now I know
That twenty centuries of stony sleep
Were vexed to nightmare by a rocking cradle,
And what rough beast, its hour come round at last,
Slouches towards Bethlehem to be born?