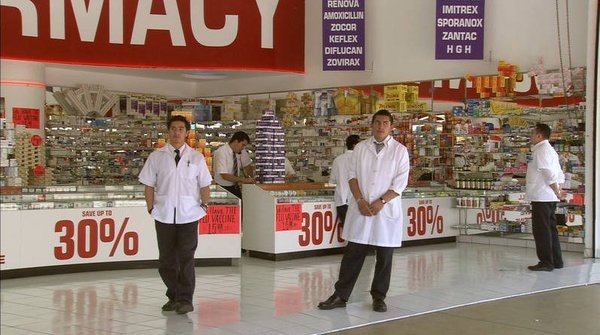 carlier | gebauer is delighted to be able to show two works by Dutch artist Aernout Mik for the first time in Berlin, namely Osmosis and Excess (2005) and touch, rise and fall (2008) in his 5th solo exhibition at carlier | gebauer. With his logical, consistently detailed video installations, Aernout Mik has assumed an important and autonomous position in the arena of contemporary art over the last few years.

Aernout Mik’s video installations very much go their own way both in their content and their formal considerations. They look like trial runs, reconstructing events on the periphery of our social reality in lavishly depicted situations, often with many extras. Situations of political domination, such as a prison camp in a gym or refugees being picked up at a motorway service station, are enacted anew, with a stratum of apparently quotidian situations, everyday confrontations with the forces of law and order, such as pupils and monitors in a school playground, or travellers at the security check in an airport, superimposed upon them. Mik’s mise-en-scène constantly shows scenarios shaped by hierarchy. However the apparently clear-cut balance of power is always disrupted in his videos. The perspectives multiply; suddenly the refugees are carrying wooden rifles, whilst the police officers are sitting on the floor and the security staff are running checks on each other. The gestures of power persist, but their subjects no longer slot neatly into their roles. Mik’s scenarios do not supply a clear narrative; instead his work extrapolates the extremes of order to such an extent that the camera ends up floating through the absurdity of a crumbling reality characterised by repetitions, recasting, mimetic courses of action with an almost ritual air, and irrational excesses. And yet Mik’s constructions do not move away from reality but record it through its extremes.

Osmosis and Excess, 2005 came into being in the borderlands between San Diego in California and Tijuana in Mexico. In the work two contrasting sequences are slotted into each other: footage of the hilly outskirts of Tijuana, dotted with countless wrecked cars, and video images of a downtown pharmacy flooded with mud. Tijuana is the Mexican pendant to San Diego in the USA; the city lies directly on the border between the two countries, with the bulk of border traffic flowing through it. Endless ageing used cars are brought across the border from the USA, only to be stripped of their useful components and abandoned. In the opposite direction, vast quantities of low-cost pharmaceuticals are smuggled from Mexico into the USA through San Diego. Osmosis and excess prevail, a repeated commodity cycle that is now virtually impossible to grasp in its entirety. The landscape along the border and the lives of the people who live there are determined by these phenomena. Osmosis and Excess makes structural correspondences visible, as well as revealing the hierarchical order shaping these. The scrap cars glitter like jewels in the sun in the hills outside Tijuana, whilst downtown medicines, arranged in eccentric series, are sold round-the-clock to US Americans looking for help in clean, brightly-light pharmacies. Mik’s Osmosis and Excess portrays the border region in an extreme panorama format as a microcosm comprising a landscape defined by circulating commodities.

touch, rise and fall, 2008 is Aernout Mik’s most recent work. The double projection takes as its starting point the security checks at an airport. Shots of shopping in the transit area clash with footage of luggage, clothing and bags being searched with excessive care. Images of clusters of exhausted and irritated passengers at the security checkpoint alternate with scenes of bored security staff on a break. Hands reach out to grab products, carry transparent plastic bags and rummage through hand luggage. Products are packed up, others are torn apart, some fall to the floor, drop to bits, are examined and then put back together again. The scenes are set in a sphere tinged with loss, devastation and consumerism, moving between ignorance, care and obsessive control. As was already the case in Osmosis and Excess, this work depicts a commodity cycle through the prism of a borderland. Whilst the goods became the dominant ornament in the landscape in the 2005 work, in touch, rise and fall they begin to impinge directly upon their owners. In the border zone objects and bodies succumb to the ongoing processes of the rise and fall in value of commodities during transit, and both equally become bodies in motion in these circumstances.

Aernout Mik was born in 1962 in Groningen in the Netherlands and now lives and works in Amsterdam. His film installations have been a regular feature in international solo and group exhibitions for over 15 years, and are also represented in numerous public collections. His key exhibitions over the last few years have included solo shows at the Stedelijk Museum, Amsterdam, 2002, in the Ludwig Museum, Cologne, 2004, the New Museum of Contemporary Art, New York, 2005, Kunstverein Hannover, 2007 and Hamburger Bahnhof in Berlin, 2007. In 2007 he also represented the Netherlands at the Biennale in Venice. The Museum of Modern Art in New York will be showing an extensive solo show of his work in 2009.

As part of the gallery exchange between Berlin and Paris initiated by the French Embassy, carlier | gebauer, in cooperation with the Galerie Natalie Seroussi from Paris, is showing a series of nine large-format drawings by Parisian litterateur, translator and draughtsman Pierre Klossowski (1905–2001, Paris). Even today Klossowski, who is firmly enshrined within the literary and art historical canon in France, is still not as well known in Germany as, for example, his younger brother, the painter Balthus. Klossowski’s oeuvre was not presented to the general public in Germany until the comprehensive solo exhibition held in Cologne’s Museum Ludwig in 2007.

This is the case even though Klossowski’s works are an important point of reference within Modernism’s artistic self-critique, whether one thinks of his translation of Walter Benjamin’s famous artwork essay, or his collaborations with Georges Bataille, Gilles Deleuze or Michel Foucault. For that reason too we are delighted to be able to present Klossowski’s works in conjunction with the Galerie Natalie Seroussi. They constitute a historical position that is also a lodestone for many of the artists represented by carlier | gebauer. The drawings created by Klossowski since the 1950s are searching for an artistic position that generates a new combination of seemingly unconnected historical citations in order to glean a perspective beyond that of a historically ambivalent Modernism.

Pierre Klossowski was born in 1905 and could well be said to been imbued with Modernism’s artistic tradition ever since he first drew breath. His father was an art historian specialising in the 19th century, whilst his mother had been taught painting by Pierre Bonnard and was close to Rainer Maria Rilke. Klossowski himself began to work as secretary to André Gide at an early age. He did, however, not begin to draw and exhibit until 1955. Writing was always to the fore for him. His first published drawings developed from his novel “Roberte, ce soir” (1955), for which he was seeking illustrations. “My drawings existed in my mind before I began to describe them in my novels”, Klossowski once said and here described a crucial aspect, which also made him so vitally important for the subsequent generation of artists. In his drawings, as in his writing, he seeks out moments of drastic expression. It is not the artistic medium itself that is foregrounded in Klossowski’s work, but its potential as a channel to express extremes. André Masson argued that Klossowski’s drawings were not illustrations but rather prolongations of his narratives. It is precisely this linguistic character of art that was already beginning to emerge in Klossowski’s “Nu au rat” (1956) and that attains such drastic force precisely by readdressing historical motifs.

Klossowski described his drawings as “grandes machines”. They appear to follow in the wake of what Roland Barthes dubbed “citable life”, composed as they are virtually entirely of references, classical themes from painting, motifs from Antiquity and the realms in which these overlap with secular figures from folklore and the Renaissance world arranged according to a perspective adopted from medieval manuscript illumination. However, as can be seen throughout the works we are showing from four decades, the topic of sexualised violence constantly jostles its way to the fore: be it the male incursion upon the female body, or, as in the four works on display from the “Saint Nicolas” series, attacks on a body of the same gender. However, in Klossowski’s drawings those who are attacked never lose their independence. In Klossowski’s works they turn from victims rendered passive to active figures taking action, transformed into protagonists in a mystery play of erotic desire.

The exhibition at carlier | gebauer brings together nine large-format coloured drawings from four decades. The early drawing „Le Nut au Rat“ of 1959, is exemplary for Klossowski’s „Gulliver-Optics“. In it, the female body is introduced as a reappearance of ancient figuration in a renewed context. The recto-verso drawing “Les Désespérés du Directoire” and “Esquisse pour le petit Rose” from 1964 and 1974 portray the sexually ambivalent development from the figure of a child playing, which is portrayed on the front of the sheet, to a hermaphrodite on the back of the drawing, beautiful and ethereal in equal measure, a figure kept and at the same time desired by the omnipresent mentor. In contrast, the four-part “St. Nicolas” series from the 1980s, which follows the journey of two young boys in a series of dramatic images, displays greater clarity in bodily terms, as does Klossowski’s emblematic 1985 drawing “Ganymède – Mont Albins”, whose central, clearly delineated figures seem to come from some pre-Raphaelite, pacified alternative universe. Klossowski’s drawings shape bodies and disintegrate them at the same time. All the examples shown at carlier | gebauer trace the steps of an exploration that tirelessly created an intertwining of literature and the fine arts over half a century and in this very endeavour found an autonomous and disorientating form of expression.