Tuesday to Saturday from 2 pm to 6 pm

Episode 2/4. Approximately 6% Conquered. The Chapuisat Brothers, Abraham Poincheval and Laurent Tixador. The project drives heroes off the beaten path. An alternative route that allows them to rediscover their environment by drifting towards its closest borders. A foreign yet nearby place. 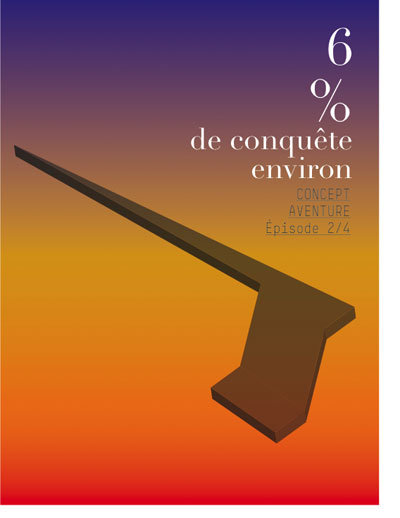 Following 15% Heroism, Approximately 6% Conquered, the second instalment of the Concept Adventure series, is now placing its heroes in a variety of environments - pursuing a goal that seems increasingly more of a pretext than an aim. A pretext to experiencing a space in a predefined timeframe. On an entirely mapped planet where nothing is left to discover, adventure seeps into daily life - from residential suburbs to strip malls, from highways to parks. Indeterminate locations - somewhere between city and country.

Approximately 6% Conquest marks this contrast which drives heroes off the beaten path. An alternative route that allows them to rediscover their environment by drifting towards its closest borders. A foreign yet nearby place. Consequently, for two weeks beginning at the opening, Abraham Poincheval and Laurent Tixador will dive into a universe both common and mysterious: the world of large companies located in the La Défense district, Paris. As for the Chapuisat Brothers, occupying la box’s exhibition space, they are setting up an improbable construction owing to experimental architecture as well as precariously built homes. Through observation and installation this investigation redefines the very conditions of experiencing space, which implies mastering a range of actions, from the most basic to the most elaborate.

The Concept Adventure programme has been drawn up specifically for la box at the School of Art in Bourges. Its focus is on the value of the notion of experience (and learning) and the paths leading to the conception of the work, then its execution and exhibition. Concept Adventure sets out to define the exhibition as a different space, a staging post where the out of field (of the work, that is) can be interpreted by inviting artists to contribute mainly site-specific projects whose mix of burlesque Romanticism, deliberate underachievement and the aesthetics of failure illustrates a post-conceptual agenda.