Projected Data Images. In the process of creating her often monumental images, the artist took paths that were radical in technical, thematic, and formal terms, using a variety of techniques of reproduction and a large reservoir of images that the artist found or generated herself. 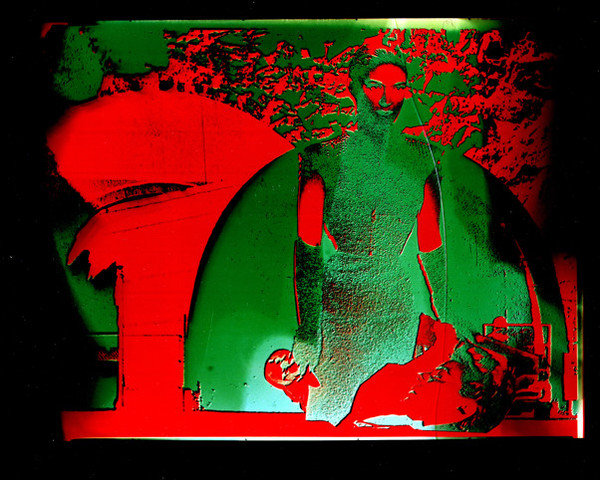 On Friday, February 6, 2009, Katharina Sieverding opens her fifth solo show at Galerie Thomas Schulte, entitled "Projected Data Images." We are pleased to be able to present this exhibition as an official contribution to the "Forum expanded" program of the 59th Berlinale. The artist will be present at the opening, which will be held from 6 to 9 pm.

Katharina Sieverding characterizes her works as "hybrid image surfaces and spaces on the border of truth and fiction, iconoclasm and the pictorial turn." Sieverding’s work was almost from the very beginning virtually antipodal to the traditional definition of photography. In the process of creating her often monumental images, the artist took paths that were radical in technical, thematic, and formal terms, using a variety of techniques of reproduction and a large reservoir of images that the artist found or generated herself. She already developed her significant style in the late 1960s as a student of Joseph Beuys, when she began working with photographic techniques. Over the course of 40 years, Sieverding’s work, with its central basic issue of "identity as individuality and collective individual," has unarguably always taken pioneering positions and exerted a great deal of influence on contemporary photographic art, anticipating and bringing about many developments.

In the exhibition "Projected Data Images" at Galerie Thomas Schulte, Katharina Sieverding consciously departs from her technique of showing her pictures as framed photographic works (usually large format C-prints). Instead, here she projects them directly onto the wall. This form of presentation was already her own in the early 1970s in connection with the strangely androgynous representations of the series "Transformer," created by way of superimposition.

But now Sieverding creates her works using incomparably more complicated digital processes that allow her to superimpose image layers even more precisely onto one another and to work very precisely on the smallest details of her large pictures, almost like a sculptor. This leads to photographic image surfaces of a striking sophistication; their delicate structure creates a fascinating overall impact in terms of composition, even when seen at a close distance. The direct projection of the images onto the wall makes it possible to experience the details with their direct color depth, radiance, and corporeality in a spatial tension that is only familiar to us from the realm of cinematography.

Katharina Sieverding (born in Prague in 1944) lives and works in Düsseldorf und Berlin. She participated in her first documenta already in 1972, with the film "Life-Death," also on view at this exhibition. In 1997, she represented Germany at the Venice Biennale, and in 2004 she was awarded the Kaiserring of Goslar. Her many exhibitions domestically and abroad include individual shows at Museum Folkwang, Essen, Van Abbemuseum, Eindhoven, Neue Nationalgalerie, Berlin, Kunstsammlung NRW, Düsseldorf, and Stedelijk Museum, Amsterdam. In the US her works have been shown at Solomon R. Guggenheim Museum, New York, Warhol Museum, Pittsburgh, Dallas Museum of Art, Walker Art Center, Minneapolis, and ICA, Boston. In 2004/05 New York’s P.S.1 and Kunst-Werke Berlin presented an extensive survey of her work.