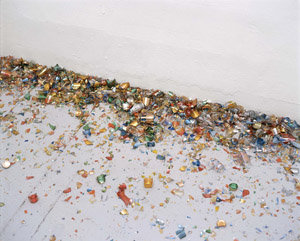 The exhibition THE SPACE BETWEEN examines various aspects of the politics of identity and language. By means of an installation of crushed glass, video and sound pieces, six artists from as many nationalities go about transforming our notions of time and space, both physically and mentally.

Latifa Echakhch’s installation Erratum measures eleven meters and consists of a quantity of oriental tea glasses which the artist has smashed against Gävle Konstcentrum’s stone floor and then swept into a corner in accordance with the gallery’s architechtonic lines. The artist, born in Morocco and raised in France, uses everyday objects in order to pose questions about a globalised reality where identities find themselves moving between different cultures.

Adrian Piper crosses centuries in a sound reproduction of a performance from 1970 when for 45 minutes she tries to interpret Johan Sebastian Bach’s concertos in D minor, A minor and C major by whistling along to a recording of them.

Maria Lindberg alludes in her piece to the gap existing between understanding and misinterpretation, presented as shortcomings in easily identified everyday situations.

Using simple actions Bas Jan Ader directs the course of events in three films documenting how he breaks into tears, arranges flowers, and slowly, gradually extinguishes the light in the room in which he is filming himself. The films generate a feeling of isolation that underscores the distance between viewer/observer and actor, where possibilities for identification are challenged by the impossibility of interaction.

Mark Raidpere investigates holes in reality in his deeply personal piece Voiceover, where he shows and translates the notions that his schizophrenic father is forced to live with. It is a confusing and violent world that is presented, a reality and a fiction that contains them both.

Gabriela Vanga’s video What if Tom Invented Jerry plays with the symbiosis between these two well known cartoon characters. Her animation examines the dynamics arising when one of a pair is suddenly removed (with the help of photoshop) while the other remains, acting with an invisible co-actor, which affects all his actions.

THE SPACE BETWEEN has been put together by Mats Stjernstedt, born and raised in Gävle, curator and art critic, and for the last eight years, head of the gallery, Index the Swedish Contemporary Art in Stockholm. In the spring of 2008 the exhibition THE SPACE BETWEEN opened the new Museum Anna Nordlander in Skellefteå and is being shown in Gävle in a revised version.