With a view to showing the works acquired by the MACBA Collection in the last two years, as yet unseen in that context, the Barcelona Museum of Contemporary Art will devote all of its exhibition space to its collections. Important donations will also be included, such as that made by Leon Ferrari. The exhibition will also feature presentation of the priority lines of interest and research at the MACBA in this new stage, initiated in 2008. Curators: Bartomeu Mari' and Antonia Maria Perello'. 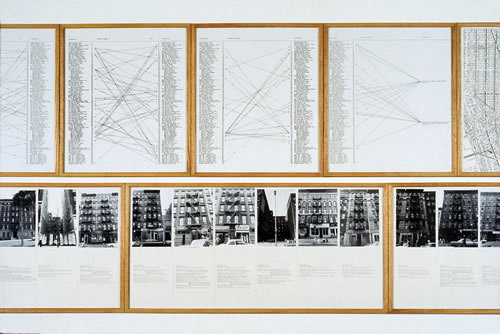 With a view to showing the works acquired by the MACBA Collection in the last two years, as yet unseen in that context, the Barcelona Museum of Contemporary Art will devote all of its exhibition space to its collections: the three floors of the Museum, the Capella dels Àngels and the exhibition hall in the Studies and Documentation Centre. The MACBA Collection has not been shown in its entirety since 2005, when some 160 works tracing a chronological reading of the Museum's own collections from the nineteen-fifties to the present day were exhibited on its three floors. Now, the Meyer building joins the two new spaces incorporated in recent years: the Capella (September 2006) and the Documentation Centre (December 2007).

Outstanding among the new works acquired by the Collection which will be shown in the exhibition is a key piece in recent art history: Shapolsky et al. Manhattan Real Estate Holdings, a Real-Time Social System, as of May 1, 1971, by Hans Haacke, acquired jointly with the Whitney Museum of American Art, New York. With this new addition, the MACBA initiates a new system of joint acquisitions and common policies with other institutions. Moreover, the exhibition will bring together significant groups of works by Pablo Palazuelo and Gego, deposited in the MACBA by the Pablo Palazuelo Foundation of Madrid and the Gego Foundation, in Caracas.

Important donations will also be included, such as that made by León Ferrari, who has presented the MACBA with five works from the eighties which were exhibited at the 2007 Documenta exhibition in Kassel, as were the magnificent photographic murals Shipwreckand Workers (2005-07), a donation from Alan Sekula.

The exhibition will also feature presentation of the priority lines of interest and research at the MACBA in this new stage, initiated in 2008. While over recent years the Collection has started to gather together documents that function as works of art (Grup de Treball, Tucumán Arde (Tucuman is Burning), works by collectives of artists and activists and so on), this has not implied forgoing the collection of great works by significant artists of our time. Alongside the abundance of fragments, it is important to consolidate nuclei of singular and complementary works that can express discourses on the nature of artistic creation and the historical moment in which we live. The MACBA is ideally placed to build a collection which explains the passing from the 20th to the 21st century, which begins with formulations of the final utopias of the last century and speaks of its crises, and then follows the present century, with its complexities and contradictions.

At the same time, the project space La Capella MACBA will host The Uncertainty Principle, an intense month-long program of films, sound works, performances and lectures, for which the space has been transformed into a theater-like installation by the artist Tobias Putrih. The aim of this experimental project is to create a collective experience of hearing, seeing and talking art, in order to develop new paths for thinking, as well as new words for addressing it.

In 1967, David Lamelas aligned on the walls of a darkened gallery an array of television sets showing no images. "The only thing you could see was the snow effect, the only thing you could hear was static", Lamelas recalled in a1972 interview. In this work, entitled Situación de tiempo, the Argentinian artist sought to explore the limits of temporality in art. Now this installation is amongst the many works brought together by the MACBA as part of the exhibition Time as Matter. MACBA Collection. New Acquisitions.

The exhibition starts with a reference to the first presentation of works from the MoMA Collection (Frank Kline, Robert Motherwell, Philip Guston, Pollock, among others) that took place in 1955 at the Palau de la Virreina, Barcelona. The exhibition was a turning point in Franco regime´s acceptance of abstract painting and Spanish informalism (Tàpies, Millares, Saura, Cuixart). At the same historical moment, Constant Nieuwenhuys developed New Babylon (1954-1972), the last global utopian project generated by Western art. The end of global utopias was declared in 1972, when Hans Haacke showed in Shapolsky et al. that the city had been transformed into a theater of real state speculation.

Through the enactment of different relations between the works and the periods in which they were produced, Time as Matter reflects on the notion of time as the complex primal substance where experience takes place. The works help us to understand that the perceived reality does not depend on an intrinsic centre or hierarchy but coheres purely through an interweaving of reciprocal relations in which the spectator is called to play a decisive role. The exhibition precisely revolves around the new reality created by the close interaction of several key notions: theater versus cinema, life performance versus television, music versus sound, place versus playground. Last but not least, the interiorization of time also opens up a new perspective on pleasure, knowledge production and the power and miseries of mass-media.

In close relationship with the subject matter of the exhibition, the MACBA Study Centre will host an exhibition of artists' books and documents.

The display of the MACBA Collection takes place every two years. However, the scale and theoretical ambition of this show establishes a landmark in the Museum's history. The Museum presents a very large number of acquisitions made since 2007 thanks to the support of the MACBA Foundation and, since 2008, the Government of Catalonia and the Barcelona City Council.

MACBA
Plaza dels Angels 1 - Barcelona
Hours
Weekdays: 11 am to 7.30 pm
Saturdays: 10 am to 8 pm
Sundays and holidays: 10 am to 3 pm
until September 27th the Museum hours will be extended till midnight every Thursday and Friday.
Closed: Tuesdays (except holidays)