The concept behind this project is architecture with a social rather than a purely esthetic concern. It is not a mere facade, with a representative function. It targets its primary application: sheltering people, especially the most disadvantages ones, disaster victims, and/or rehabilitating a downtrodden social class. 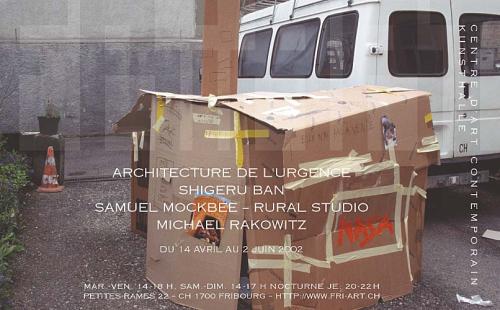 The concept behind this project is architecture with a social rather than a purely esthetic concern. It is not a mere facade, with a representative function. It targets its primary application: sheltering people, especially the most disadvantages ones, disaster victims, and/or rehabilitating a downtrodden social class. Economy and efficacy are its common denominators.

Samuel Mockbee, who passed away last December the 30th at the age of 57, taught architecture at the uni-versity of Auburn in Alabama. With his students of the Rural Studio, founded by him and D.K. Ruth in 1993, he designed and built lodgings for the disadvantaged families of County Hale, one of the poorest counties in the poorest US state. The use of found or recycled materials, such as used tires, automobile windshields or hay bales is characteristic of the Rural Studios work, which has set itself the goal of creating well-designed and beautiful houses for everyone not just for those who can afford them.
Mockbees work is currently being presented at the Whitney Museums first architectural Biennale. He is rapidly gaining great recognition. [Rural Studio: http://www.arch.auburn.edu]

Shigeru Ban (1957) lives and works in Tokyo. This Japanese architect has already made a considerable in-ternational reputation for himself, mainly thanks to his villas, which are always based on a theme: The For-est, 9 Rooms, The wall curtain house. His reputation in Europe is grounded on the work he did for the Japanese Pavillion at the Universal Exhibition in Hannover in 2000, at which he demonstrated that it is pos-sible to build a house with a cardboard tube structure. He invented this technique several years ago, design-ing emergency shelters for the victims of the earthquake in KobÃ©. These were later adapted for use in Rwanda by the United Nations. These constructions take the potential of constructive invention and project thinking to their outermost limits: the use of poor or sophisticated technologies and materials, solutions adapted to ultimate environmental or practical constraints. Fri-Art will present the Paper Loghouse and one of the Paper Refugee Shelters. Shigeru Bans work will be shown in the next Dokumenta in Kassel.

Michael Rakowitz (1973) is a young New York artist who designs inflatable shelters for the homeless, which he calls paraSITES. These supple structures make use of exhaust hot air coming from air ducts in apartment blocks. He will create such a specially designed shelter on our premises. At the Continuous Con-nection exhibition, organised by the Unesco and Felissimo in Paris, Rakowitz was awarded the Grand Prix Design 21 for this inflatable shelter.

Opening on Saturday 13 April at 5 pm

Every Thursday during the exhibition, Sushi in La Cuisine
Reservations until Wednesday evening : 026 323 23 51

Thursday 23rd of May at 8 pm : Guided tour of the exhibition with Michel Ritter, Director of Fri-Art