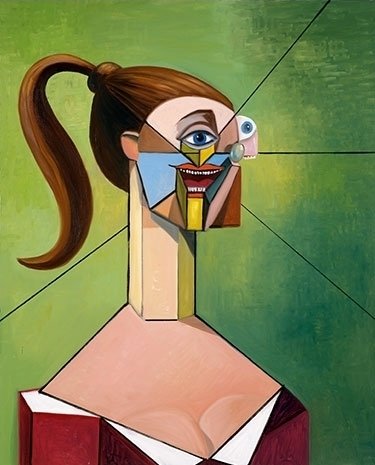 The work of George Condo is grotesque, comic, baroque and sinister. His paintings, drawings and sculptures portray humanlike figures that make one think of caricatures and cartoon films. But these characters are brought to life on canvas in an expressive utterly painterly manner. Condo goes about his work in the traditional way, with preliminary studies and paying a great deal of attention to shades of colour, light and brush strokes. The artist has studied the work of artists such as Goya, Rembrandt and Velázquez in considerable depth. He is also influenced by Warhol and Duchamp. His portraits blend art history with elements of pop culture to arrive at a complex whole that he himself describes as ‘artificial realism’. They depict a contemporary, painterly vision of western society.

In his second solo exhibition at Xavier Hufkens, George Condo stages a dialogue with the figure. Portraits and drawings are distorted in the style of cubism. Others are delivered in a dramatic style, evoking the costumes and brush strokes of 17th century old masters. Blue Rodrigo and Middle Aged Vampire have all the intensity of a Francis Bacon painting. However, the work of Condo is more like a collage of styles or a sum of pictorial ideas. A contemporary emotionality is incorporated in the groups of seemingly traditional portraits, sketches and sculptures. The rows of teeth play a prominent role, as if they are belong to voracious creatures. In the smiles and expressions of his characters, the artist portrays the hysteria and idiocy of these times.

In the clown series, superficiality, self-representation and subcutaneous fear despair are evoked in a masterly fashion. Here, Condo treats human psychology as a diverse complex topic, fixing upon the emotional ambivalence of human expression.

In his work, George Condo strives towards a new conceptualization of classical painting. A reflection on staging, representation and simulation is embedded in one pictorial story narrative. His portraits, studies and groups can be read as an allegory of Zeitgeist. They demonstrate a transition from a cartoonish to a subcutaneous reality.

George Condo (1957) was born in Concord, New Hampshire. He has exhibited extensively in the US and Europe. His work has featured in exhibitions in the Whitney Museum and MOMA in New York, the Contemporary Arts Museum in Houston, the Museo de Arte Contemporáneo in Monterrey, Mexico, the MAMAC in Nice, France, the Staatliche Kunthstalle Baden-Baden, Germany, the Bonnefantenmuseum in Maastricht, the Netherlands, and the Irish Museum of Modern Art in Dublin, Ireland. His work is in the permanent collections of MOMA, the Whitney Museum, the Guggenheim Museum and the Albright-Knox Museum in New York.

A catalogue of the exhibition including a text by Thomas Kellein will be available from the opening.