The project addresses the euphoric consumer culture of the last decade that manifested itself in a seeming overflow of goods and services and an explosion of luxury housing development that now dominates the urban landscape. Works by Michael Ashkin, David Baskin, Betty Beaumont, Gretchen Bender, Dara Birnbaum, Jef Geys, Dan Graham, Louise Lawler and others. 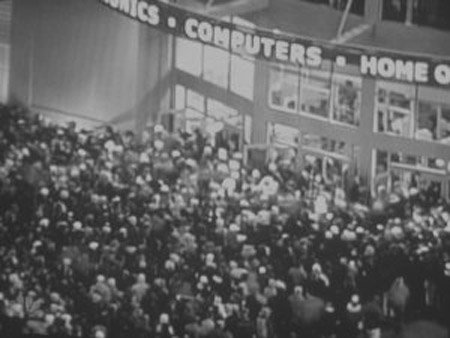 Market Forces, Part 1/ Consuming Territories, and Market Forces, Part 2/Consumer Confidence, were first presented at carriage trade in New York in the winter and spring of 2008, and will be shown together at Galerie Erna Hecey in Brussels in May, 2009. A short exerpt from the original press release appears below.

Market Forces addresses the euphoric consumer culture of the last decade that manifested itself in a seeming overflow of goods and services and an explosion of luxury housing development that now dominates the urban landscape. The term is derived from laissez-faire economic theory and refers to a hands-off approach to the ‘natural order’ of supply and demand. Used in this context, it is meant to invoke skepticism concerning the almost religious belief in, and militant protection of, our god-given right to consume. This two-part exhibition is intended to be as inclusive as the market is pervasive, with work that addresses the influence of consumerism on personality, labor, politics, and the built environment.

First developed as a text in late 2007, the concept for Market Forces was, in part, a response to the overwhelming dominance of the neo-liberal economic model on social and cultural conditions in the U.S. and abroad. As the housing and consumer bubble grew to historic proportions, the American media repeatedly endorsed the notion of limitless economic expansion. Any doubts about the risks of bundling fraudulent housing loans and tossing them into the global financial stream for short term gains or to question the amount of debt consumers could hold were seen as ‘spoiling the party’ and were rarely expressed on primetime TV. Anchors on financial news shows functioned as cheerleaders for the boom, smugly nodding their heads up and down with every rise in housing prices or the Dow. Dozens of housing related reality shows appeared on cable TV with names like ‘Flip This House’, featuring opportunistic contractors who ‘spruced up’ homes of marginal character and doubled the price for the next in line to cash in on skyrocketing prices before the music stopped.

Meanwhile, urban communities across the country were being uprooted by rampant speculation, as real estate developers offered lifelong residents piles of money to ‘cash out’, tearing down their houses and replacing them with ersatz modernist ‘luxury’ condos. Many who stayed took out risky but instantly lucrative mortgages, which lead to purchases of SUV’s and whatever could be stuffed into them. Every year of the boom offered a new round of Christmas-time mayhem, as consumers fought for their right to shop. As shopping mall doors opened in the early morning hours of Black Friday, those shoppers unfortunate enough to stumble through first were occasionally trampled in the mad rush to be the first to get a deal on the newest Xbox.

The original presentation of Market Forces examined the decade long economic boom in what, in retrospect, appears to have been the moment of its peak. Linking the built environment and commodity culture, which too often had been seen as separate phenomena, these exhibitions focused on the social and psychological effects on a society enthralled with the consumerist ethos, a state of mind that is as short on memory as it is long on optimism. With constant media reports of a global economy stuck in reverse, the ‘panic of 09’ threatens to displace the origins of a crisis which brought the ‘threat’ of nationalization to the U.S., where government intervention in business affairs was once considered heresy. Given the reluctance of societies in the midst of market euphoria to entertain skeptical views, perhaps this is now the moment to reflect on the social aspects of economic relations often overlooked during the decade-long boom.